With rain threatening, but never arriving beyond a few spots, throughout qualifying, Hamilton had the advantage after the first runs in Q3. 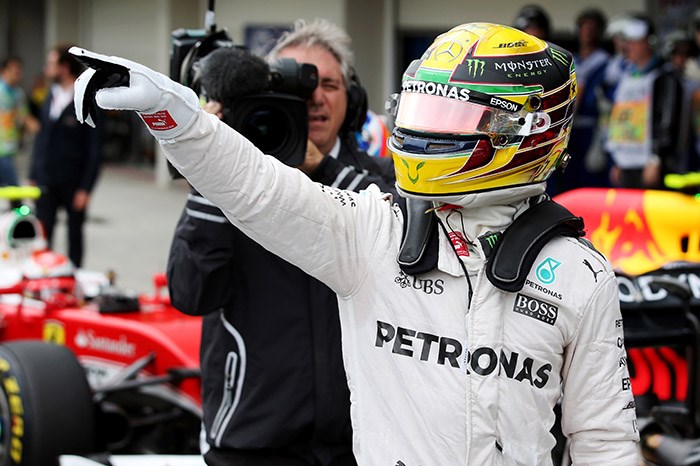 With rain threatening, but never arriving beyond a few spots, throughout qualifying, Hamilton had the advantage after the first runs in Q3.

While Rosberg did make a small improvement on his second run, Hamilton was fast enough to defend top spot - with his pace in the long middle sector particularly strong.

Kimi Raikkonen capitalised on the two Red Bull drivers and Ferrari team-mate Sebastian Vettel failing to improve on their second runs to jump to third late on, 0.668s off pole.

Max Verstappen shaded Vettel for fourth by just a hundredth of a second, complaining about losing rear grip mid-way through his second flier, with Ricciardo aborting his final quick lap in the middle sector and not able to do better than sixth.

Nico Hulkenberg had the edge in the Force India battle, lapping half-a-tenth faster than team-mate Sergio Perez, with the pair in eighth and ninth place.

McLaren-Honda returned to Q3 after a three-race absence, Fernando Alonso ending up 10th.

Williams pairing Valtteri Bottas and Felipe Massa were both eliminated in a late flurry of improvements in Q2 as some spots of rain fell.

Bottas missed out on the top 10 by just 0.060s to Hulkenberg, while Massa had a poor first run then was unable to make a big enough improvement to do better than 13th.

The two Williams cars sandwiched the Haas of Esteban Gutierrez, with the Toro Rossos of Daniil Kvyat and Carlos Sainz Jr 14th and 15th, and Renault driver Jolyon Palmer 16th after several lock ups on his only Q2 lap on fresh rubber.

Jenson Button was the highest-profile casualty in Q1 in 17th place, lapping almost six tenths slower than team-mate Alonso and complaining of a lack of front grip having failed to improve his time on his second run.

Kevin Magnussen did improve on his second run having been slowest on the first, but that was only good enough to jump up to 19th, ahead of the Manors of Pascal Wehrlein and Esteban Ocon.

But Ocon was the only driver to get in trouble with the stewards, who will investigate whether or not he impeded Palmer as the Descida do Lago downhill left-hander during the session.

Sauber drivers Marcus Ericsson and Felipe Nasr annexed the back row, with the Swede finding a bigger improvement on his second run to jump ahead of his team-mate by just 0.058s having earlier been over three tenths slower.

Nasr complained about traffic during his second run, although he was still able to improve on his first-run time by over four tenths.