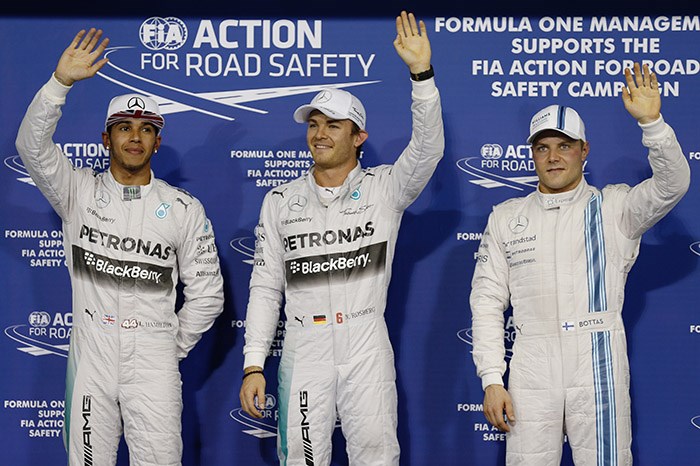 The German outpaced title rival and Mercedes team-mate Lewis Hamilton by just over three tenths on the first runs in the top-10 shootout.

He then improved on his second run, avoiding the lock-up later in the lap that cost him time on the first.

Although Hamilton also improved, he ended up 0.386 seconds off Rosberg to line up second.

But even if Rosberg wins Sunday's race, Hamilton need only finish second to be sure of the title.

Williams again looked a potential threat in qualifying but when it came to the fastest runs in Q3, the pace advantage of Mercedes shone through.

Valtteri Bottas ended up third, just over half a second off Rosberg, with team-mate Felipe Massa just behind.

Jenson Button beat the two Ferraris to eighth place, with Kimi Raikkonen ninth after only completing one run in Q3 thanks to having run out of fresh super-softs.

Fernando Alonso, on his Ferrari swansong, was 10th having failed to improve on his second run thanks to locking up and running off the track.

Kevin Magnussen in the second McLaren only had one proper run in Q2, likely because of the same underfuelling problem that also forced Button to abandon his first run before setting a laptime.

The Dane had looked set to make the top 10, only for Raikkonen and Kvyat to knock him down to 11th on their final laps.

Jean-Eric Vergne was also knocked down the order in the final seconds, ending up 12th, with the two Force Indias of Sergio Perez and Nico Hulkenberg behind.

Romain Grosjean missed out on reaching Q2 by just over two hundredths of a second during a frenetic battle in the final seconds of the first segment of qualifying.

First, Lotus driver Pastor Maldonado moved into a Q2 position before being bumped by Esteban Gutierrez, who was then relegated by Sutil.

Grosjean's final lap was not quite enough to beat Sutil, leaving him in 16th place, although he will drop to the rear of the field thanks to 20-place penalty for changing power unit components.

Gutierrez ended up 17th, ahead of Maldonado and the two Caterhams.

Kamui Kobayashi's was the faster of the two green machines, although F1 debutant Will Stevens gave a good account of himself by lapping just over half a second slower despite limited running in the car.

HOW THE TITLE WILL BE WON IN ABU DHABI