The Finn's qualifying simulation run yielded a time of 1m23.063s, 0.4 seconds clear of Ferrari's Sebastian Vettel, who was on the same tyres. 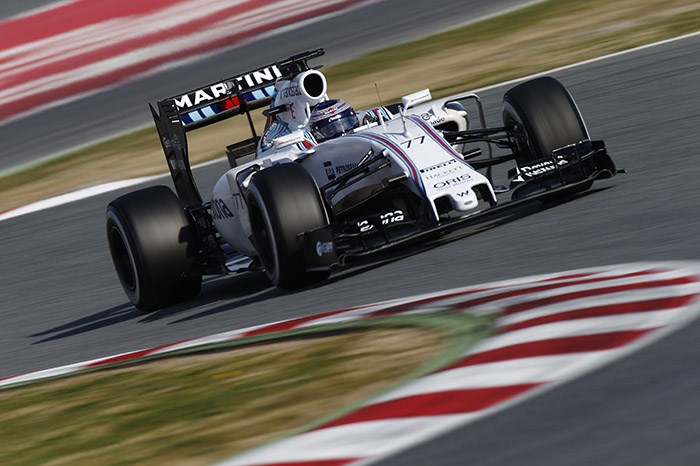 Valtteri Bottas's morning run on the super-soft tyres was enough to ensure Williams ended the final session of pre-season testing on top, as McLaren endured another difficult day.

The Finn's qualifying simulation run before lunch yielded a time of 1m23.063s, 0.4 seconds clear of Ferrari's Sebastian Vettel, who was on the same tyres.

Such was Williams's confidence with its progress that the team chose to end its running at the Circuit de Catalunya early for the third consecutive day, packing up with 89 laps on the board.

After a flurry of super-soft runs in the morning, the focus switched to longer stints after lunch as teams finetuned their preparations for the season-opening grand prix in Australia on March 15.

Sauber's Felipe Nasr was third quickest and achieved the highest lap tally with 159. Four drivers broke the 100-lap mark during a busy afternoon.

Jenson Button was not one of those drivers, as McLaren's problems continued.

The Briton missed most of the morning because of a sensor issue that required the team to remove the Honda power unit so it could fix the problem.

He eventually got out just before lunch, but only made fleeting appearances in the afternoon as he put 30 laps on the board - the fewest of anybody.

Mercedes topped the table in terms of laps completed across all three tests. Nico Rosberg covered 148 laps for the seventh fastest time on a low-key day for the world champion team.

Meanwhile, Force India had another trouble-free day, despite its 2015 car having only made its debut on Friday, with Sergio Perez completing an impressive 130 laps.

Pastor Maldonado was involved in the first crash of the four-day test when the Venezuelan went into the barriers at Turn 4 to bring out the second red flag.

Lotus was unable to fix the car in time to get Maldonado back out and he ended the day bottom of the timesheets.

Daniel Ricciardo, who finished fifth quickest, caused the first red flag of the day, when the Red Bull driver stopped at the end of the pitlane with an ERS problem, but he returned to clock up 72 laps.

Meanwhile, Max Verstappen was responsible for a third red flag when the Dutchman rolled to a stop at Turn 12 due to engine trouble not long after lunch.

But Toro Rosso did an impressive job to repair the car to allow him to get back out for the final 10 minutes of the session and he ended fourth fastest.