Rosberg aborted his final run having been informed Hamilton made a mistake, earning the fifth pole position of his F1 career. 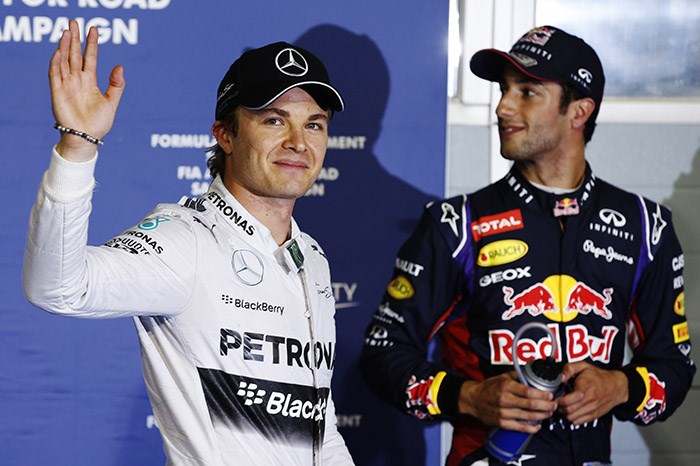 Lewis Hamilton had set the pace throughout practice and headed into the session as favourite for pole position, but after being outpaced by Rosberg on their first runs in Q3 had a big lockup on his second lap at Turn 1 and ran wide, preventing him from mounting a challenge for pole.

Rosberg aborted his final run having been informed Hamilton made a mistake, earning the fifth pole position of his F1 career.

Daniel Ricciardo was one of the few drivers to improve on his second run in Q3, jumping to third on the grid.

This relegated Valtteri Bottas to fourth, the Finn proving that the Williams team's pace during pre-season testing here was no fluke with a place on the second row.

Force India driver Sergio Perez has been strong all weekend and was fifth fastest, only a tenth slower than Bottas.

He shaded Kimi Raikkonen, who had only one run in Q3 because he had only one set of fresh rubber remaining, by 22 thousandths of a second.

McLaren pairing Jenson Button and Kevin Magnussen ended up seventh and eight, split by the second Williams of Felipe Massa, with both making late improvements as they also had only one set of new softs for the session.

Fernando Alonso was slowest in Q3 after a disappointing final lap, ending up six tenths slower than team-mate Raikkonen.

Red Bull opted to complete just one run in Q2 and Vettel complained about downshift problems after missing the cut by six-hundredths of a second.

Nico Hulkenberg, who has struggled to match Force India team-mate Perez all weekend, also failed to hook up a good enough lap to make Q3 after running wide onto the kerb at Turn 11, ending up 12th ahead of the Toro Rossos of Daniil Kvyat and Jean-Eric Vergne.

Pastor Maldonado was the fastest driver to fall in Q1 in 17th place. He was pipped by Grosjean, who set a time just nine thousandths of a second faster than his team-mate in the dying moments of the first part of qualifying.

Grosjean was impeded by Adrian Sutil's Sauber late in the session, an incident which will be investigated by the stewards tonight.

The German was also knocked out in Q1, while Caterham continued its recent upward curve in terms of performance, with Kamui Kobayashi 19th fastest, lapping within a quarter of a second of Sutil, and Marcus Ericsson 21st.