Hamilton was 0.365 seconds faster than his Mercedes team-mate Nico Rosberg. 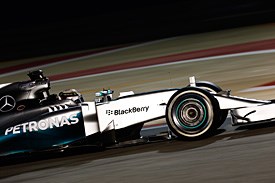 Mercedes continued to set the outright pace in Formula 1 as Lewis Hamilton topped the timesheets at the end of the second practice session for the Bahrain Grand Prix.

Hamilton was 0.365 seconds faster than his Mercedes team-mate Nico Rosberg.

Held in warm, dry conditions - five degrees cooler than this afternoon's first practice - this was the first ever Formula 1 practice session in Bahrain to be held under floodlights.

Third quickest was Fernando Alonso in his Ferrari, significantly more than a second slower than Hamilton, pointing to the continued superiority of the Mercedes team.

Red Bull's Daniel Ricciardo was fourth fastest ahead of the Williams of Felipe Massa, who had a nervy moment as he was seemingly baulked by Esteban Gutierrez on the back straight a few moments before the session ended.

In sixth place was Jenson Button's McLaren, one position ahead of world champion Sebastian Vettel.

This second session of the day was all about the Mercedes pair. Rosberg was the first of the two silver machines to switch onto the soft tyre and his first run on the new rubber was two seconds faster than his pace on the medium tyres.

Soon afterwards Hamilton upped the ante and his first run on the soft tyre was immediately 0.365 seconds faster than his team-mate.

It was another eventual period for Lotus as first Romain Grosjean complained of a misfire with his Renault, while his team-mate Pastor Maldonado enjoyed a spectacular moment as he got all four wheels airborne after hitting the kerbs at Turn 4.

Briton Max Chilton retired from the session with 35 minutes remaining after he suffered a high-speed spin at Turn 4. He complained on his team radio that he lost drive then the rear axle locked and pitched his Marussia into a spin.

A few minutes later Adrian Sutil climbed out of the cockpit of his Sauber at Turn 6 following a problem with his car. Another retiree was Marcus Ericsson, who stopped his Caterham at the side of the track just five minutes from the flag.

Early on there was a dramatic moment as Sergio Perez narrowly avoided a slow-moving Rosberg as they headed towards the final corner.

The German initially moved to his right to get out of the Force India driver's way, and Perez had to take action to avoid hitting the Mercedes. The stewards said they would look at the incident after the session.