Vettel and reigning F1 champion Lewis Hamilton traded quickest laps throughout the four hours of running at the Catalunya circuit. 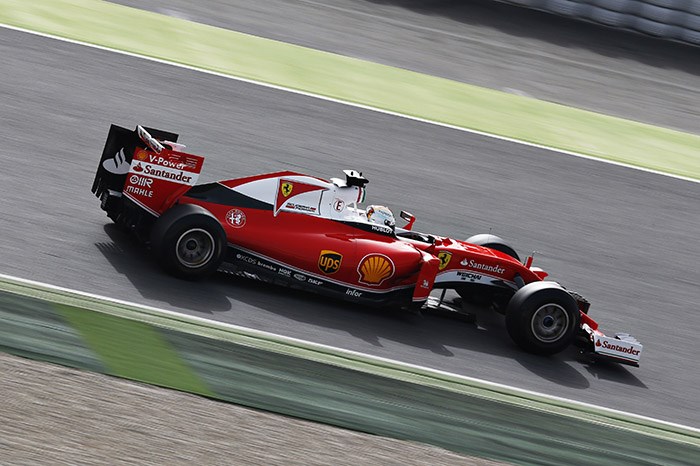 Sebastian Vettel kickstarted Ferrari's 2016 Formula 1 campaign with the fastest time on the opening morning of testing at Barcelona.

Vettel and reigning F1 champion Lewis Hamilton traded quickest laps throughout the four hours of running at the Catalunya circuit until late on when the 28-year-old German surged ahead.

The four-time champion set a time of 1m24.939s on medium Pirellis, the tyre of choice for the majority of the session following early spells on the intermediates due to a damp track after light morning rain.

There was also unmarked rubber on show on occasion, with Vettel quickest on such a set at one stage midway through, which turned out to be the medium compound.

Pirelli explained it is testing the quality of tyres being produced in its back-up production plant in Romania.

Traditionally, the tyres are made in Turkey, but as a precaution Pirelli wants to ensure its Romanian plant is capable of producing them to the required standard.

The tyres have been made available to all teams who have the option on whether to run them, with tests this week being conducted on the medium, and next week on a compound yet to be decided.

Vettel's best time was posted on a marked set of mediums. He finished 0.470 seconds clear of Hamilton, who clocked up the highest lap count with 66.

As a benchmark, the best time in testing last year at the circuit was a 1m22.792s from Nico Rosberg in his Mercedes on a set of softs.

Williams's Valtteri Bottas was third quickest, a further seven tenths of a second behind Vettel, followed by Daniel Ricciardo in his Red Bull with a lap of 1m26.704s.

Running in an unmarked Toro Rosso as the livery is still in the pipeline and to be unveiled from the start of the second test next Tuesday, Carlos Sainz Jr was fifth on the timesheet, 2.2s adrift of Vettel.

Jenson Button completed 35 laps in his McLaren-Honda on what appeared to be a relatively trouble-free morning for the team following its woes in 2015, with the Briton's best lap a 1m27.691s.

In last year's Sauber as the 2016 model will not be ready until test two, Marcus Ericsson was seventh best, followed by Romain Grosjean for debutant Haas.

Grosjean suffered a front-wing issue at the end of the main straight, resulting in him completing just 13 laps.

On his F1 debut, Force India reserve Alfonso Celis Jr was down in ninth, 4.467s off Vettel, with Jolyon Palmer 10th quickest on Renault's works return to F1, finishing 6.412s off the pace.