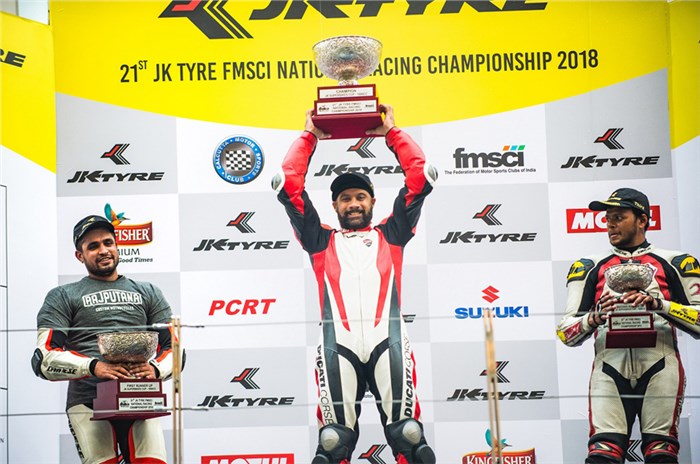 Ducatis ridden by Gurvinder Singh Matharu (25 points) and Deepak Ravi Kumar (22 points) secured first and third place, respectively, in the JK Superbikes Cup 1000cc at the 2018 JK Tyre Indian National Racing Championship (INRC). Meanwhile, Dilip Lalwani (riding an R1) took second place with a total of 24 points. This means that Ducati has effectively sealed the championship, which comprises only one race weekend. The racing was held at the Buddh International Circuit in Greater Noida.

On this occasion, Sergi Canovas, managing director of Ducati India, said, “This is the first time Ducati supported riders at the JK Tyre Racing Championship and it turned out to be worthwhile living up to the expectations. We are glad to have Gurvinder and Deepak as our pilot riders on Ducati Panigale V4 S and V4 respectively. We look forward to participation next year and further showcase Ducati’s racing DNA.”

Ducati claims that both race-winning bikes, the V4 and V4 S, were essentially in stock trim. However, the V4 S was running a select number of official Ducati accessories, including an Akrapovic exhaust. Naturally, there were slight modifications like the removal of unnecessary components, including the mirrors and rear fender. The bikes were also riding on racing slicks (supported by Pirelli) and not the standard tyres. Ducati also provided a 959 Panigale to Neharika Yadav, who completed the championship in 23rd place.

On a related note, Vijay Singh (30 points) finished first in the JK Superbikes Cup 600cc, followed by Kulwant Singh (24 points) and Kamran Dubash (19 points) – all of whom were riding Triumph Daytona 675s.