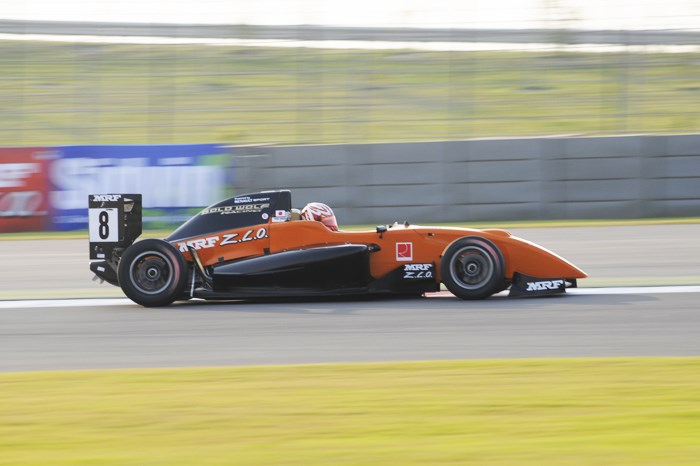 American Conor Daly and Japanese Yuudai Jinkawa won one race apiece on second day of round two of the MRF International Challenge, running as a part of the 2012 Sidvin Festival of Speed at the Buddh International Circuit.

Daly, who was on pole for race one, got a clean start and was never really troubled for the lead while several drivers contested for second and third – including Alice Powell and Luciano Bacheta. Yesterday’s winner and tally leader Jordan King was absent from proceedings as he had to fly back to the UK to attend the 2012 McLaren Autosport BRDC Award ceremony in London, where he is one of the five finalists.

Ultimately it was GP 3 racer Alice Powell and F2 driver Hector Hurst who finished second and third respectively behind Daly.

Race two featured a top-six reversed-grid and it was Indian APRC driver Gaurav Gill who was on pole after finishing a credible sixth in race one, ahead of experienced single-seater compatriots Parthiva Sureshwaran and Parth Ghorpade.

After losing a place to Japanese Yuudai Jinkawa who was involved in a massive shunt with Tom Gladdis yesterday, Gill was doing well to hold second despite some quicker cars behind him putting him under immense pressure. However, a sudden tyre issue with the front left surfaced and he had back right off and pit to change tyres, putting him out of contention.

Sixth-placed starter Conor Daly had lost some places at the start but was recovering well and was in fifth place behind Hector Hurst when he suddenly clipped the back of the British driver at the approach to turn four and broke his front suspension.

Ultimately, Jinkawa was followed home by Noel Jammal and Sam Dejonghe in second and third to round off the podium.

The MRF International Challenge will return to its home base at the Chennai circuit for the final two rounds in February.