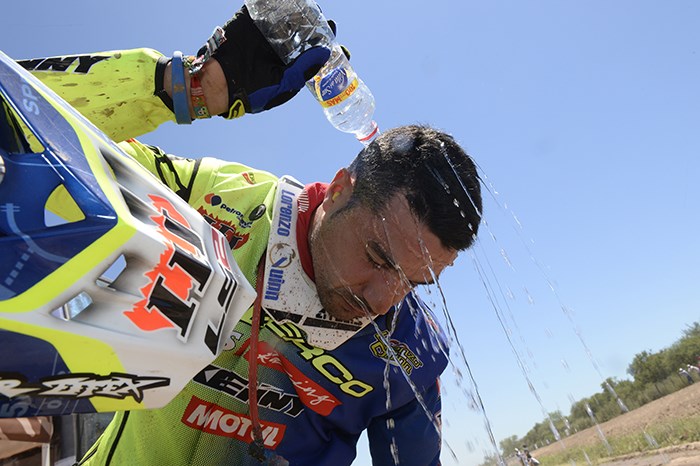 After a short prelude stage on the previous day, Dakar kicked off in earnest at the crack of dawn on Tuesday with 830 kilometres between the Argentinian cities of Resistencia and San Miguel De Tucuman on the plate, with the timed section consisting of 275 kilometres.

TVS Sherco’s Juan Pedrero continued his strong showing as he finished the stage in 11th place which ensured him a ninth place slot in the overall standings at the end of two stages. Defending Dakar winner Toby Price was once again back in front; leading the field with almost a four-minute advantage.

For Dakar debutant Aravind KP, things did not go to plan after a wrist injury suffered on day one prevented him from attacking the bumpy sections of today’s stage. The Bangalore rider was in extreme pain throughout, barely holding on to the handlebars. To top it off, he also had to tow his teammate Adrien Metge, who encountered bike issues in the stage around the 200km mark. Resultantly, Aravind lost a substantial number of places, ending up 125th overall out of 133 riders still in contention. Definitely not an ideal situation for the Dakar debutant.

Over at the Hero Motorsport camp, CS Santosh regained some of his lost momentum from yesterday, finishing the stage in 41st position, which elevated his overall position to 37th – a ten-place gain from day one. His teammate Joaquim Rodrigues had some GPS issues to contend with, but managed to finish 22nd in stage 2 and resultantly dropped to 22nd overall, losing six places compared to his day one placing.

As the temperatures soared close to 45-degree centigrade and distances increased – the competitors very well know that these are but some of the most simple and straightforward sections of the Dakar. The surfaces are predictable, the trail style stages don’t require much navigation and the weather has been quite consistent so far despite some rain creating minor surprises for riders in today’s stage.

Stage 3 will see competitors negotiate a distance of 757 kilometres between Tucuman and Jujuy, with a 364 kilometre special stage on the agenda. The rise altitude will accompany a drastic change of scenery as well, and the navigation aspect will play a key role as riders will be forced to follow their compasses and roadbooks accurately in absence of any real trail.

Tomorrow, the Dakar will really come into its own.