The Dakar will resume today after competitors have recharged and recuperated during the rest day at La Paz. Here’s a recap of the proceedings so far. 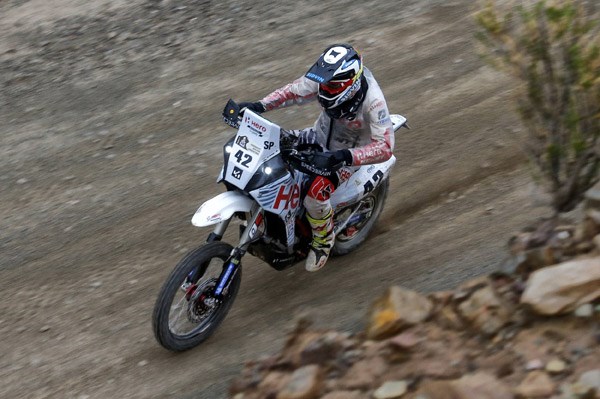 Even though it is only half-way through, the 2017 edition of the Dakar Rally has already shown why it is the toughest race in the world.

Incessant rain and low temperatures forced the cancellation of stage six, which would have seen the competitors traverse a mammoth 527-km stage from Oruro to Bolivian capital La Paz. However, bad weather conditions saw some competitors on stage until late night, unable to return to the bivouac in time to prepare for next day’s stages.

The rains also washed away the tracks in the stage and swelled up rivers in the mountainous region of Bolivia. Earlier the organisers had shortened the stage to 292km, but as there was no let-up in the weather, decision was taken to cancel the stage altogether.

The drivers and riders therefore arrived in La Paz by road on Saturday to a rapturous welcome by thousands of Bolivians who gathered in the city centre. When the Dakar cavalcade arrived in La Paz all activity seemed to come to a halt as residents lined up the streets to cheer the participants as they rode or drove through the town to the bivouac.

After the well-deserved rest day at La Paz, the rally is set to resume today – the route taking the participants back across Argentina before culminating in Buenos Aires on January 14.
In the overall classifications, the Dakar has already claimed two of the favourites in moto and car categories. Toyota’s Nasser-Al-Attiyah dropped out on stage three after a big crash caused irreparable damage to his Hilux. The following day, moto standings leader Toby Price crashed heavily as well, breaking his femur bone in four places which lead to an instant retirement.
For the Indian contingent in the Dakar, it has been a mixed bag so far. TVS Sherco's Juan Pedrero is classified 25th right now, having been close to the top 10 early on until an engine failure in stage four saw him lose out substantially. He’s back on a charge now though, posting 4th fastest time in shortened stage 5.

His teammate Adrien Metge, who is classified 46th right now, has also had his fair share of bad luck. A mechanical issue in stage two saw him tumble down towards the fag end of the classifications. He has been in recovery mode since then, his charge derailed slightly when he had to tow Pedrero out in stage four.

Dakar debutant KP Aravind was sadly forced to drop out of the rally after a bad crash that resulted in a shoulder injury. The TVS Sherco rider was already nursing a hand injury from day one and this incident put him out of contention straightaway. Having escaped any serious injury, Aravind has elected to stay back with the team and see the Dakar through from the sidelines.

In the Hero Motorsport camp, Joaquim Rodrigues ‘J-Rod’ has been on a consistent charge, gaining places in classifications almost every day without any slip-ups. A GPS issue in stage two did not deter the Portuguese rider who is on the fringes of the top 10, presently classified 11th overall. Considering he had started 25th, it has been a credible performance so far and hopefully he will sustain the same momentum to make his way into the top ten.

Indian CS Santosh has not had the best starts to the Dakar in his debut season with Hero-Speedbrain. Starting the rally in 42nd place, he dropped five places in the short opening stage. He subsequently put on a strong showing in the second stage to gain lost momentum. However, the navigationally-challenging stage three really hurt his chances. The Indian rider lost over an hour in the opening sections of the stage, and had a few crashes as well which upset his rhythm. To make matters worse, he missed a waypoint and was handed a one-hour penalty for the same. Since then, he has been in recovery mode is currently classified 70th out of 111 classified riders.

Today, stage seven will take the riders from La Paz to Uyuni as first part of the marathon stage comprising a total distance of 622 km, out of which 322 km originally made up the timed special section. However, due to continued wet weather in Bolivia, the stage distance has been halved by the organisers. However, being a marathon stage, only the participants will be allowed in the Uyuni bivouac, while the assistance crews will head to Salta.

No outside help will be allowed to the riders at the end of the seventh stage. They would thus need to conserve their machines for the second part of the marathon stage from Uyuni to Salta before they once again have access to assistance crews.