Aravind KP continues to make steady progress and has improved his ranking to 48th overall; Santolino out after suffering a major crash. 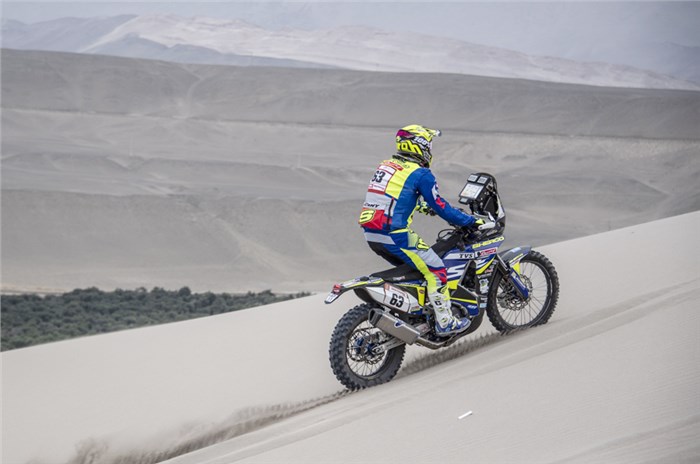 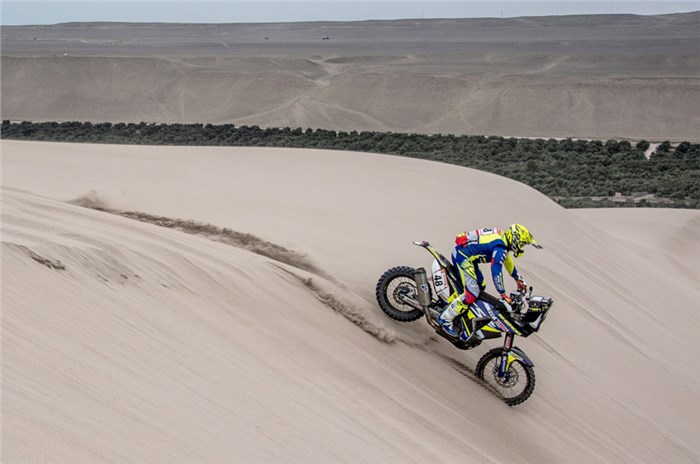 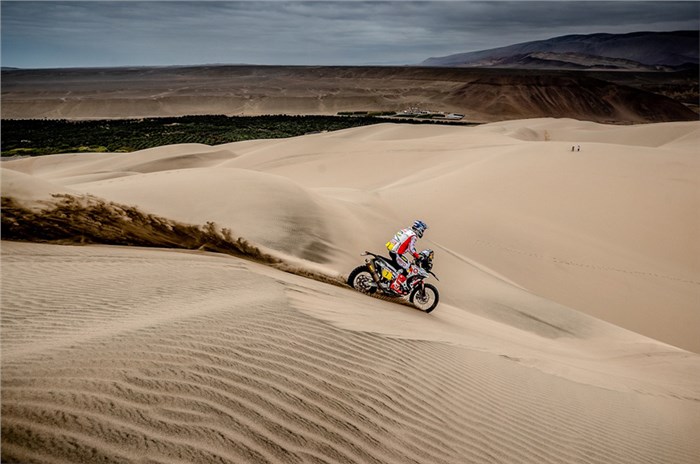 After a much-deserved rest day, the 2019 Dakar Rally resumed with competitors making their way to San Juan De Marcona for Stage 6.

With a majority of the stretch consisting of sandy terrain and tricky dune sectors that are especially designed to stir up the overall rankings, Stage 6 served up some major challenges. Sherco TVS suffered a big blow to its campaign after its fastest rider Lorenzo Santolino retired from the rally following a major crash. Santolino had to be evacuated by the medical team, but Sherco TVS has reported that he is out of danger. The crash brings an end to what has been an immensely impressive debut Dakar outing for the Spanish rider, who was running 11th overall after the previous stage.

Aravind KP continues to make steady progress and has improved his ranking to 48th overall. Despite running into some navigation problems due to an issue with his roadbook, he completed the stage as Sherco TVS’ fastest rider, in 44th place. “I had a good start to the stage with a good rhythm on my motorcycle. But soon the roadbook machine on my motorcycle stopped working and so I had to scroll manually. This broke my rhythm and I had a few minor crashes. It was a challenging day for sure but I am glad to have the stage in the bag,” he said.

Mechanical issues made it a testing stage for Adrien Metge, but he was able to complete the stage with assistance from his brother Michael Metge. Adrien is now 33rd in the general classification, while Michael is 36th overall, the duo having completed Stage 6 in 71st and 64th place, respectively.

The Hero MotoSports riders had to work their way around their own issues. After suffering a major crash in the previous stage, Oriol Mena took a more cautious approach to Stage 6, but ran out of fuel towards the end. However, he was able to complete the stage in 20th place after his teammate Joaquim Rodrigues gave him fuel from his own bike. Rodrigues lost some time helping out Mena, but his 30th-place stage finish has helped him climb several positions in the overall rankings and he’s now 25th overall. Mena, while, is 13th in the general classification.

While the Dakar Rally has always been a high-attrition event, this year’s event has seen only 74 percent of the competitors make it to the halfway mark – the lowest percentage since 2007. With both Sherco TVS and Hero MotoSports still having three and two riders respectively in the running, the teams are in a strong position.