Marquez claimed his 50th win in the premier class and is now 63 points clear of Andrea Dovizioso in the overall standings. 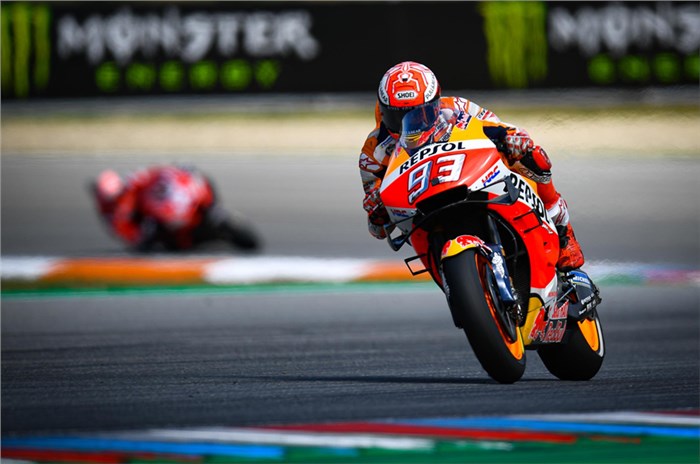 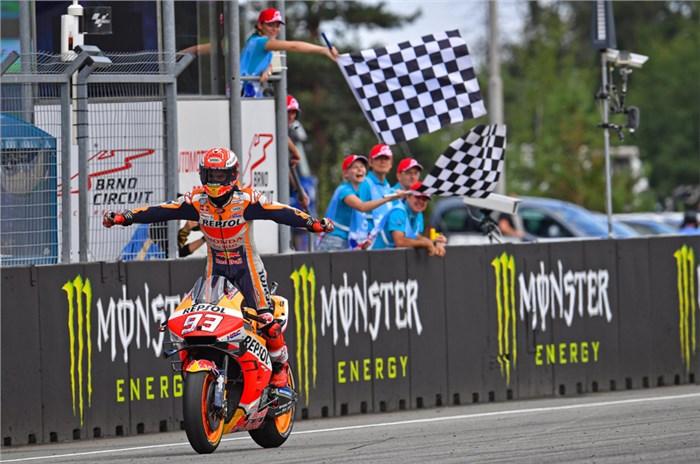 Marc Marquez has extended his championship lead to 63 points after a largely uncontested win – his 6th of the season and a landmark 50th in the premier class. Andrea Dovizioso – second in the championship with 147 points – finished in 2nd place, with Jack Miller taking the last step on the podium.

The start of the race was delayed after the weather played spoilsport and rains after the Moto2 race left wet patches in the first sector of the track. 40 minutes after the race was originally scheduled to begin, the lights went out and Marquez got a great start off the line. Just down the order, Johann Zarco, who started 3rd, fell back to 12th and was involved in an incident with Franco Morbidelli, resulting in the Italian crashing out and taking Joan Mir with him. Zarco continued on, crossing the line in 14th place.

Rins put up a good fight and held on to 3rd place for most of the race. However, Pramac Ducati’s Jack Miller stayed close throughout, before pulling the pin on the penultimate lap. LCR Honda rider Cal Crutchlow passed Valentino Rossi around the halfway mark and held on to finish in 5th place. Rossi, in 6th, was Yamaha’s top finisher, a position ahead of top rookie Fabio Quartararo who rides for Petronas SRT. The second factory Ducati of Danilo Petrucci finished in 8th, with the top 10 rounded off by Takaaki Nakagami and Maverick Vinales.

It was a mixed weekend for KTM – it saw two of its factory riders in the top 5 after Saturday's qualifying and its first front-row start. Race day, however, didn’t go as well, with the top KTM rider being Pol Espargaro in 11th place. Jorge Lorenzo missed this race, still recovering from a back injury, with his replacement rider Stefan Bradl finishing in 15th place, atop the same race winning machine as Marquez. Hafizh Syahrin crashed out on lap seven, taking the total DNFs to three.