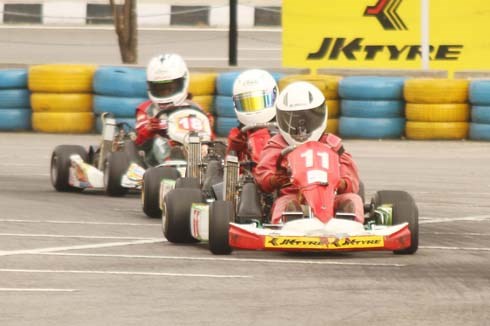 The three champions, however, were made to work hard for their success as going into the fifth and final round here over the weekend, none enjoyed clear-cut leads.

Kush Maini, the 10-year old schoolboy, had to wade through stiff opposition, and though he won both the finals, it was still touch-and-go right through.

“Next year, I will be moving into the junior category and I am looking forward to competing with my brother Arjun. My experience in competing in a few international events in Malaysia and Singapore helped me to come through tight situations,” said Kush who will turn 11 on September 11.

Arjun Maini won the first final quite comfortably from Jehan Daruvala who led briefly exiting turn 1, but conceded lead to the Bangalorean who gradually built up a winning lead.

In the second final, Jehan jumped into the early in the race and opened up a sizeable gap while Arjun, who finished second, drove sensibly with an eye on the championship.

“It was a tough weekend and Jehan was very fast in both the finals. In the second final, Jehan opened a big lead and I couldn’t catch up. Also, I wanted to finish the race and win the championship,” said Arjun.

The first final in the Senior Max category was hard-fought from start to finish. Raj Bharath took an early lead but eventually dropped out of contention as as Chittesh Mandody, Ameya Bafna and Vishnu Prasad, who had started from eighth position, slipped past him.

Bafna, the schoolboy from Mumbai and Vishnu Prasad, the 18-year old student of SRM University, Chennai, were then involved in a tense battle. Prasad overtook Bafna with a brilliant move on the inside, but later ran over the kerbs to lose position. Bafna moved into second spot, but could not catch up with Mandody.

In the second final, Mandody moved ahead exiting the first turn, but Bafna took back the lead. Thereafter, it was a procession as the 18-year old Mandody eschewed all risk in a bid to finish the race while the other championship contender Prasad retired in the first lap due to mechanical problem.

“I have been waiting for this moment for a long time. It was a difficult weekend, but I was determined to be consistent through the races, and I am happy to win the championship,” said Mandody from Kolhapur.