Hamilton went fastest on his first run in Q3 then improved by almost half a second on his second run to consolidate his position. 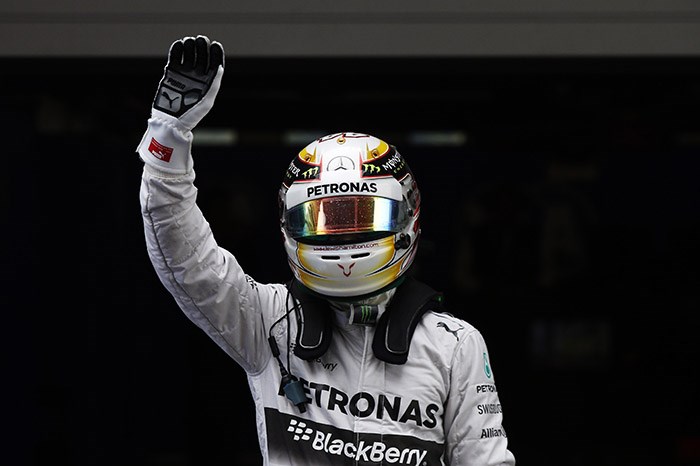 Mercedes' Lewis Hamilton claimed his third pole position of the 2014 Formula 1 season by setting the pace in qualifying for the Chinese Grand Prix.

With qualifying held in wet conditions, initially with most running on wets before the intermediates became the tyre of choice, Hamilton went fastest on his first run in Q3 then improved by almost half a second on his second run to consolidate his position.

It is the 34th pole position of Hamilton's F1 career, meaning he has broken Jim Clark's British record, with only Michael Schumacher (68), Ayrton Senna (65) and Sebastian Vettel (45) still ahead of him overall.

This means he outqualifies team-mate Sebastian Vettel for the third time this season, with Vettel third ahead of the second Mercedes of Nico Rosberg.

Rosberg had looked set to take provisional pole away from Hamilton on his second run, but he carried too much speed into the hairpin, running wide and preventing him from improving.

A spin at the final corner on his final attempt ensured that Rosberg could do no better than fourth.

Romain Grosjean put a Lotus into Q3 for the first time since 2013, ending up slowest in the top 10 shootout.

Both were unable to set a good enough pace on their second set of intermediates to break into the top 10 after being bumped out of it by well-timed improvements by Vergne, Massa, Hulkenberg.

Button, who complained of a lack of front tyre temperature, and Raikkonen both lapped quickly enough in the first two sectors to make Q3 on their final laps, but worsening conditions in the final sector made it impossible to improve overall.

Daniil Kvyat was 13th ahead of Adrian Sutil, Kevin Magnussen and Sergio Perez.

Esteban Gutierrez was the fastest of those to fall in Q1. He had looked set to seal a place in the second stage of qualifying with a late run on intermediates before a very poor final sector, including a wide moment at the final corner, ruined his attempt.

Pastor Maldonado was classified 22nd as he was unable to participate thanks to an engine problem that forced him to stop on track during morning practice.