Nico Rosberg could only manage fifth in the second Mercedes, with Kimi Raikkonen emerging as Hamilton's closest rival. 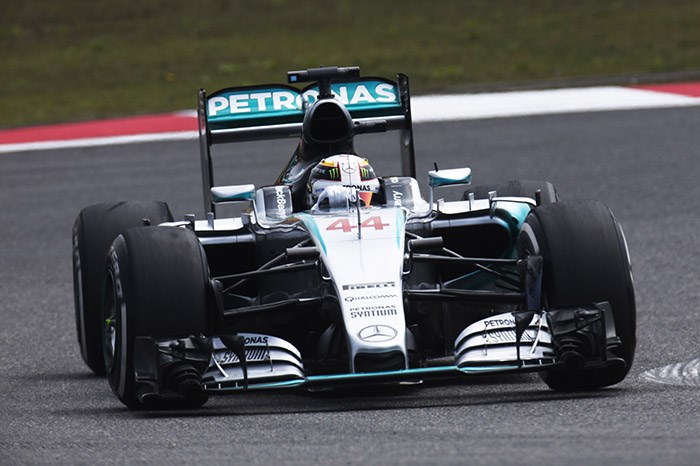 Nico Rosberg could only manage fifth in the second Mercedes, with Kimi Raikkonen emerging as Hamilton's closest rival and Daniel Ricciardo putting his Red Bull between Raikkonen and Sebastian Vettel's Ferraris in third.

The spectator incident was the first curiosity. The man accessed the track on the pit straight and ran across to the pitwall between cars before climbing into the pitlane, where he was apprehended.

At that point, Hamilton led Rosberg by a tenth of a second following the early medium-tyre runs, with the Mercedes formation a second clear of the rest.

Raikkonen was their closest rival, and initially managed the best soft-tyre lap of anyone, leaping to a 1m37.662s to lead the session.

That was seven tenths better than Vettel and Rosberg - who had a messy final sector - could manage.

But Hamilton was able to put together a tidier lap than his team-mate and came through in 1m37.219s to steal Ferrari's limelight.

The Red Bulls sat out the first half of the session and were then interrupted by a red flag when they did join in.

Felipe Massa lost his Williams at high speed under braking at the end of the back straight, scraping the wall in the hairpin run-off with the front of his sideways car.

Although there appeared to be only minimal damage, Massa parked in the run-off and a stoppage was required to retrieve the car.

When Ricciardo did get chance to do a flying lap, he shot between the Ferraris to go third, with Kvyat taking sixth.

But Kvyat's session then came to an early end when smoke started pouring from his rear brakes.

Even though he followed Red Bull's advice to proceed very slowly back towards the pits, the Russian could not slow down sufficiently into the Turn 14 hairpin and skated all the way to the wall.

Kvyat still held his top-six place as by that time the field had switched to long runs - which were enlivened by Rosberg and Raikkonen managing several corners of unusually spicy wheel-to-wheel racing for a practice session.

There were signs of light for McLaren, as its new alliance with Honda appeared in the top 10 in a session result for the first time.

At the back, Will Stevens lost part of the session to an engine problem, but was able to rejoin right at the end.