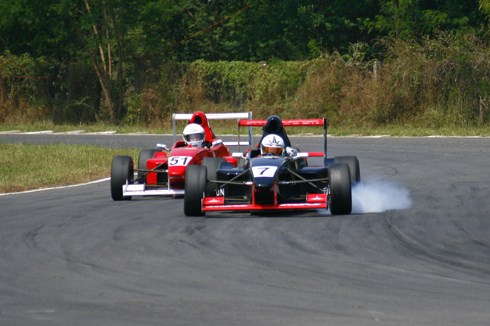 The opening round of the MRF Formula Championship 2011 turned out to be a rampageous affair starring crashes, protests and exclusions on grounds of technical infringements as competitors took it too far on and off the track.

16-year old Briton Jordon King looked all set to dominate the weekend after posting quickest times in official practice before grabbing pole from Arjun Balu. However, things turned around as he jumped the start on the fourth red light. Knowing well that he would be slapped with a hefty penalty, he drove all guns blazing in a bid to limit the damage and managed to squeeze into second place after a 20-second penalty promoted second-placed Ashwin Sundar to the top spot on the podium. Ameya Walavalkar managed to finish third after Gaurav Gill and Arjun Balu endured off-track excursions on the opening lap.

However, Jordon’s relief was short lived as stewards excluded him and another competitor, Sahil Shelar, from the race later in the day on grounds of technical infringement as the front anti-roll bar on both cars was found disconnected- which isn’t allowed as per regulations.

Race two was a comparatively calm affair as Ashwin managed to take the lead on the opening lap and held off Jordon till the chequered flag despite the latter’s repeated attacks. Ameya Walavalkar took the final spot on the podium after Arjun Balu and Karthik Shankar failed to hold on to it after the earlier part of the race.

Intense action was predicted for race three as top-five reverse grid was adopted but King once away got away clean with Karthik Shankar taking advantage of the reverse grid, finishing second. Team mates Gaurav Gill and Arjun Balu got entangled once again which resulted in a DNF for Balu while Gill barely managed to finish the race. Meanwhile, Ameya Walavalkar- who had started on pole was cruising to an easy second place but Ashwin had other ideas as he attacked the Mumbai driver at C2 and the resulting contact sent Ameya spiralling off-track which pretty much ended his race while Ashwin continued on to finish second. Despite no official protest, the stewards didn’t take a very kind view of the incident and slapped Ashwin with a 30-second penalty, which relegated him to seventh with Finn Jukka Honkavuori elevated to third place.

In the Super Saloon races, it was Siddharth Kishore who top honours in both races while the Group D bike class saw Ten10 Racing rider Sarath Kumar taking victory by a mile in race one while a technical malfunction on Sarath’s bike in race two saw A Prabhu of Moto-Rev India take the spoils. In the 600cc class, K Rajini of Red Rooster Racing left no scope for his opposition as he dominated both races from pole to flag.