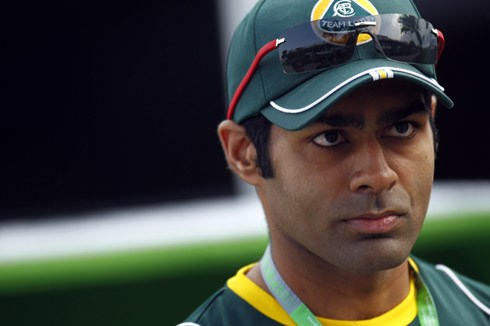 Mallya, whose team has launched a programme to find new Indian talent, said over the British Grand Prix weekend that he did not understand why Chandhok or compatriot Narain Karthikeyan would want to drive for back-of-the-grid teams in F1.

Chandhok, who made his grand prix debut with HRT last year, is currently Lotus's reserve.

Karthikeyan drove for Hispania this year before he was dropped in favour of Australian Daniel Ricciardo.

"As far as the existing Indian drivers in Formula 1 are concerned, I can only feel very sorry for them," Mallya said. "They are getting drives by the teams who clearly can't compete.

Speaking to the Reuters news agency on Wednesday, Chandhok hit out at Mallya for his comments.

He also suggested Force India's programme was simply not enough to get new Indian drivers into F1.

"I think it's a bit sad that in one breath the chairman of our Indian ASN is talking about how much he has done for Indian drivers and then in the next breath he is criticising India's only two Formula 1 drivers," Chandhok said.

"If you are going to criticise people, at least do it with some facts. Having never tested either Narain or myself in one of his cars, he doesn't have the facts.

"But you are not going to find the next Indian star by running events in single-engined four-stroke rental karts on 400 metre tracks made out of concrete."