The rain fluctuated throughout each segment, and in Q3 the best shot at pole came in the opening moments before conditions deteriorated further. 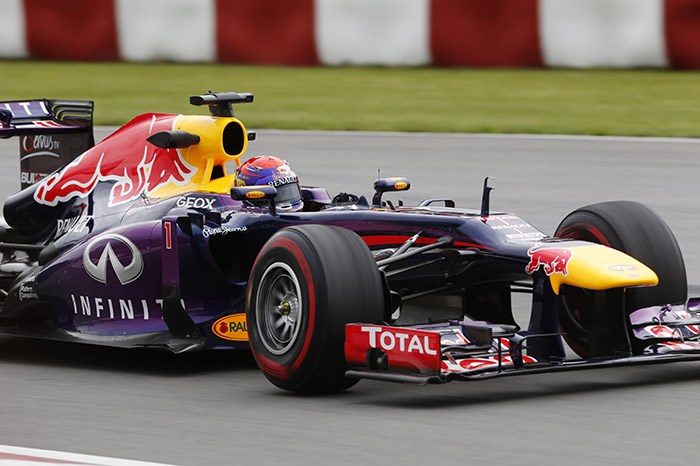 The rain level fluctuated throughout each segment, and in Q3 the best shot at pole came in the opening moments before track conditions deteriorated further.

It still looked vulnerable as driver after driver improved in the first two sectors, but the rain was heavier in the final part of the track and no one could make an overall gain.

Hamilton tried his utmost to continue Mercedes' pole streak but fell 0.087 seconds short, sliding over the chicane on a dramatic final bid.

Bottas was the hero of qualifying. Williams had not made it into Q3 at all in 2013 until Canada, where the Finnish rookie flew throughout the session.

He beat Nico Rosberg, dominant in qualifying for Mercedes for the last three races, to third place.

The second Ferrari will start down in 16th due to Felipe Massa spinning into the Turn 3 barriers in Q2 and causing a red flag.

That triggered a two-minute scramble on an improving track to try to secure the final Q3 places.

It was Sutil and Ricciardo who succeeded, but it proved painful for McLaren, winner of the last three Canadian GPs.

Jenson Button was outside the cut at the time and mistimed his attempt to find clear track position, not making it past the flag in time.

That left him 14th, while team-mate Sergio Perez's failure to improve meant he was pushed back to 12th, alongside Nico Hulkenberg's Sauber.

Pastor Maldonado's Williams and the second Sauber of Esteban Gutierrez were the other Q2 casualties.

Paul di Resta and Romain Grosjean did not get that far. Both were denied chances to progress when the rain intensified in the closing minutes of Q1.

Grosjean, who already faces a 10-place grid penalty for running into Ricciardo in Monaco, had made a mistake on an earlier run, while di Resta lost time in the garage with gearbox issues.

Charles Pic looked like he might just replicate Caterham team-mate Giedo van der Garde's Q2 heroics from Monaco as he sat 11th near the end of Q1. But after a spin at Turn 6, he slipped to 18th.