Red Bull's world champion was on a different level to his rivals throughout the race. 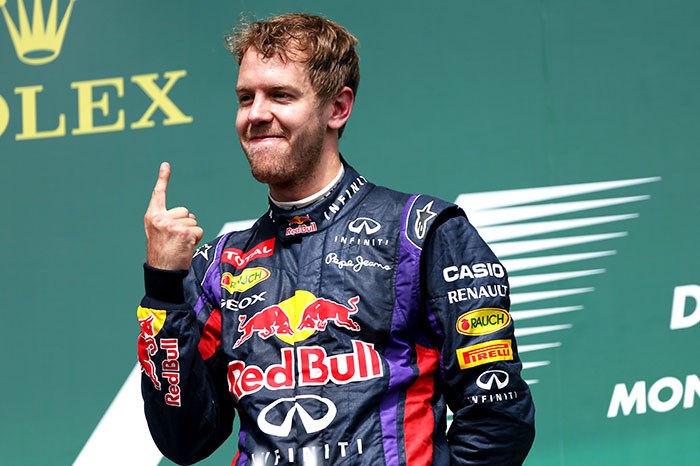 Sebastian Vettel stretched his Formula 1 championship lead to 36 points with a commanding victory in the Canadian Grand Prix in Montreal.

Red Bull's world champion was on a different level to his rivals throughout the race.

He converted his pole position advantage to a two-second lead over Lewis Hamilton's Mercedes by the end of lap one.

That lead built to 20s before Vettel heeded team advice to cool his pace, though along the way he still had a brush with the Turn 4 wall and a trip over the Turn 1 grass.

Vettel's victory was Red Bull's first ever in Canada, and by the end of the race he had lapped all bar the top five.

Fernando Alonso clawed his way from sixth on the grid to second for Ferrari.

In the first half of the race he joined a battle for third with Nico Rosberg and Mark Webber, having passed qualifying hero Valtteri Bottas early on. The Williams had dropped from third to fifth behind the Mercedes and Red Bull off the line.

Rosberg could not keep his tyres alive as well as those pressuring him. After some very close calls, Webber got ahead on lap 30, with Alonso following on the next straight.

Webber then seemed able to keep Alonso at bay until Giedo van der Garde turned in on him while being lapped, taking a chunk from the Red Bull's front wing.

Unsurprisingly its pace slowed and Alonso overtook Webber then set off after second-placed Hamilton.

Another long and close tussle ensued, and the pair spent much of lap 63 side by side before Alonso made it ahead.

Hamilton stayed within DRS range and tried to retaliate on the next lap, but the move failed and he had to settle for third ahead of Webber and Rosberg.

Jean-Eric Vergne drove a strong race to a career-best sixth for Toro Rosso, dropping away from the lead quintet while keeping the rest of the field covered.

Paul di Resta converted 17th on the grid to seventh, not making a pitstop until lap 57.

His Force India team-mate Adrian Sutil survived a spin while trying to pass Bottas, a punt from Pastor Maldonado, and a penalty for ignoring blue flags to take 10th.

The Force Indias were split by the battling Felipe Massa and Kimi Raikkonen.

McLaren simply did not have the pace to score, as Sergio Perez and Jenson Button struggled to 11th and 12th.

Romain Grosjean also tried a one-stop but ultimately had to pit again, dropping him from potential points to 13th.