Canadian GP: Hamilton flies to pole ahead of Vettel

The Mercedes driver posted a lap of 1m11.459s to beat Ferrari rival Sebastian Vettel by over three tenths of a second. 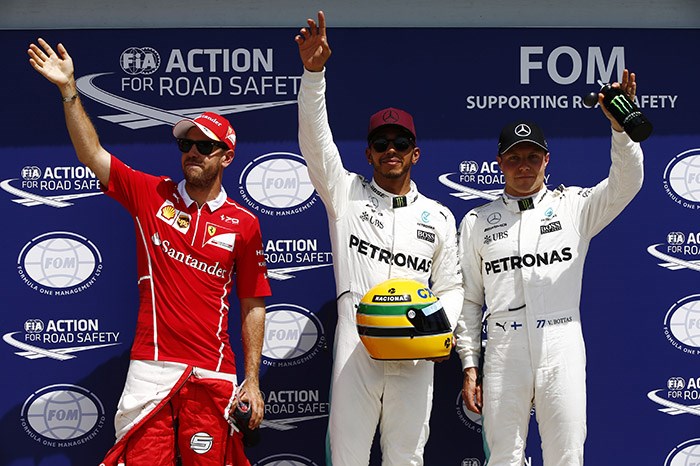 Lewis Hamilton secured his sixth pole position in Montreal after flying to first place in qualifying for the Canadian Grand Prix.

The Mercedes driver posted a lap of 1m11.459s to beat Ferrari rival Sebastian Vettel by over three-tenths of a second.

It was Hamilton's fourth pole of the 2017 season and the 65th of his career, matching his hero Ayrton Senna's tally.

Teammate Valtteri Bottas was third, but over seven-tenths slower than Hamilton, the Finn qualifying ahead of the second Ferrari of Kimi Raikkonen.

Max Verstappen and Daniel Ricciardo will share the third row of the grid in the Red Bulls.

Felipe Massa qualified seventh for Williams, ahead of the Force Indias of Sergio Perez and Esteban Ocon. Nico Hulkenberg completed the top 10 in the Renault.

After being beaten by Ferrari in practice this morning, Mercedes had found something extra for the afternoon showdown and Hamilton’s team mate Valtteri Bottas took third ahead of compatriot Kimi Raikkonen in the second scarlet car.

Red Bull weren’t far off the pace either, with Max Verstappen and Daniel Ricciardo fifth and sixth respectively, followed by Williams’ Felipe Massa, the Force Indias of Sergio Perez and Esteban Ocon, and Renault’s Nico Hulkenberg who completed the top 10.

With the secret to a good lap here being to warm up the front tyres, everyone was very dutiful as the Q1 session began in warm sunshine. Bottas narrowly headed Hamilton, ahead of Vettel and Verstappen, Massa, Perez and Ocon. But Vettel used supersoft rubber as the others went straight to ultrasofts - the clear inference was that Ferrari had the option to keep some powder dry for Q2 and Q3.

Vettel’s response on his second run was equally stellar, though, coming up just four-thousandths short at 1m 11.795s.