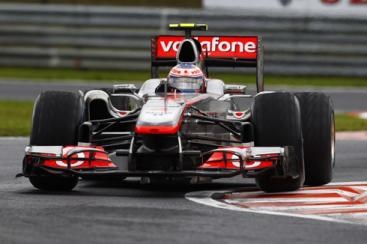 Jenson Button claimed his first victory for McLaren with a brilliant drive and a perfect tyre strategy in a thrilling Australian Grand Prix.

The reigning world champion's bold early switch to dry tyres in a race that began damp put him in position to inherit the lead when a brake failure pitched Sebastian Vettel (Red Bull) into the gravel and out of a race he had hitherto controlled.

Robert Kubica claimed a superb second for Renault, fending off Felipe Massa and Fernando Alonso's Ferraris, and Nico Rosberg's Mercedes in a tense finale as the top four finishers nursed their tyres to the end while their pursuers took on fresh rubber at half-distance. Lewis Hamilton (McLaren) and Mark Webber (Red Bull) had been in the thick of this fight too until a late tangle.

In contrast to the lacklustre Sakhir race, Melbourne delivered thrills and spills from the outside, with the race commencing on a damp track.

As the field slithered through Turn 1 for the first time, contact between the slow-starting Alonso and Button sent the Ferrari spinning into Michael Schumacher's Mercedes, breaking its front wing, with Hamilton jinking over the grass in avoidance.

Sauber's Kamui Kobayashi then arrived at the kink before Turn 6 already missing his front wing from a previous incident, and speared into the inside wall before sledging back across the track and violently collecting both Sebastien Buemi's Toro Rosso and Nico Hulkenberg's Williams mid-corner. That inevitably prompted a safety car.

The Red Bulls had been split into the first corner by Ferrari's Felipe Massa, who made a superb start from fifth on the grid. But Red Bull formation was resumed two laps after the restart, as Webber slipped past the Brazilian into Turn 6 and left him to try and fend off Kubica and Rosberg.

The McLarens had ended up sixth and seventh once the first corner mess unfolded, with Button in front until Hamilton dived past him into Turn 3 on lap six. Button then decided the track was ready for slicks and pitted.

Soon the whole field was following Button's example, although the two Red Bulls stayed out longer than most as the team expected more rain. Ultimately only light drizzle came, and the leaders belatedly went for slicks as well.

That tactic still succeeded for Vettel, who rejoined from his stop just ahead of the flying Button, who had vaulted to second thanks to his brave early tyre switch, but Webber stayed out until lap 10, losing out to Kubica and Rosberg - and then Massa too as he went over the grass at Turn 1 as he rejoined.

Vettel soon started edging away from Button, with Kubica and Rosberg dropping back from the two leaders. Behind them, some epic racing was underway, mostly involving drivers trying to get around Massa.

Brake failure denied Vettel a near-certain victory, and while the disconsolate German trudged back to the pits, Button found himself in the lead by 6sec over Kubica, who soon had Hamilton all over the back of him, while behind them Massa made it past Alonso with an outside line move at Turn 3.
Alonso, however, would not get past his team-mate so easily, remaining trapped behind Massa for lap after lap.

By half-distance many drivers were struggling with wear on the soft tyres they had taken once the track dried, and after an initial slew of midfield pitstops, Hamilton, Rosberg and Webber all decided they needed fresh rubber too.

With eight laps to go, Kubica, Massa, Alonso, Hamilton and Webber were nose to tail in second to sixth places, with Rosberg gaining on the queue as well. Hamilton's tyres went off again in the Ferraris' dirty air, but he still got alongside Alonso into Turn 13 two laps from the end. As Alonso kept Hamilton to the outside, Webber hit the back of the McLaren under braking, smashing the Red Bull's front wing and spinning Hamilton through the gravel. The latter rejoined in sixth, with Webber falling to ninth.

Button stayed comfortably clear of this mayhem, masterfully keeping his tyres in shape and cruising to victory with a 12s margin over Kubica.

Although Adrian Sutil was an early retirement, Tonio Liuzzi scored again for Force India in seventh, passing Sauber's Pedro de la Rosa mid-race and then gaining another place when Rubens Barrichello decided to pit for new tyres and dropped from eighth to 10th. He then inherited seventh thanks to the Hamilton/Webber tangle.

Schumacher never really recovered from his first lap delay, spending the majority of the afternoon trapped behind Jaime Alguersuari's Toro Rosso. Although he eventually overtook the young Spaniard, they would swap places again when both pitted for tyres and had to muscle back past the Toro Rosso in the closing stages. Both then passed the struggling de la Rosa, allowing Schumacher to at least salvage a point.

Heikki Kovalainen got to the finish for Lotus in 13th, with Karun Chandhok also going the distance for Hispania in 14th.