World champion Sebastian Vettel (Red Bull) managed to get up to second from sixth while -sitter Lewis Hamilton took the final podium spot for McLaren. 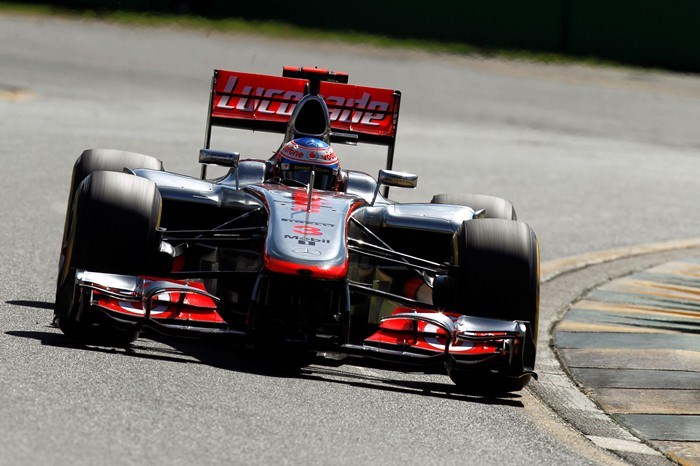 Jenson Button opened the 2012 Formula 1 world championship with a commanding victory for McLaren in the Australian Grand Prix in Melbourne.

World champion Sebastian Vettel (Red Bull) managed to get up to second from sixth on the grid, fending off pole-sitter Lewis Hamilton's McLaren and the second Red Bull of Mark Webber.

Button claimed the lead at the start with a better getaway than his pole-sitting team-mate, and then quickly established a lead of three seconds, which stayed stable through the opening stint.

The two Mercedes occupied third and fourth initially, but Vettel overtook Nico Rosberg on the second lap, and Michael Schumacher's run in third lasted only until lap 10, when he retired with a gearbox problem. That elevated Vettel into third, but the champion was 12 seconds down on the McLarens by then and could make little impression.

Third-place qualifier Romain Grosjean (Lotus) dropped to sixth off the line, and was another early retirement when he clashed with Williams's Pastor Maldonado on lap two. Maldonado would lose ground with a trip through the Turn 6 gravel three laps later, but rejoined in ninth.

The gap between the McLarens grew to 10s at the first stops when Hamilton emerged behind Kimi Raikkonen (Lotus) and Sergio Perez (Sauber), who were running extremely long first stints.

That allowed a train of cars to develop for second, as Vettel gained and brought Alonso - who made a great start then jumped Rosberg in the first pitstops - with him, and Rosberg, Webber and the recovering Maldonado closed in too. Webber had initially fallen back with a poor start and a first corner clash with Force India's Nico Hulkenberg, who had to retire.

The lead order remained static until Vitaly Petrov's Caterham brought out a safety car by stopping on the pits straight with a steering problem in the middle of the final pitstop sequence.

The McLarens had both just stopped, whereas Vettel had not, and the Red Bull was able to get in for its tyre change under the safety car and get back out between Button and Hamilton.

Vettel was still no threat to Button, though, as the 2009 champion confidently pulled away from his successor at the restart and left the Red Bull to fend off Hamilton through the final stint.

Webber also benefited from pitting under the safety car to get in front of Alonso at the last stops. The Ferrari could not keep up with the Red Bull thereafter, and as Webber chased Vettel and Hamilton home, Alonso had to focus on successfully defending fifth from Maldonado - who made the task easier when he crashed heavily on the very last lap.

The final-lap chaos ahead allowed Toro Rosso's Daniel Ricciardo to pick up his first F1 points at home with ninth place, despite having lost ground in a first-corner clash with Bruno Senna (Williams), which also sent Jean-Eric Vergne off the road in the sister Toro Rosso. Paul di Resta completed the top 10 for Force India.

Felipe Massa briefly made it into the top 10 in the second Ferrari, but struggled with poor pace and high tyre wear, making three stops and falling back to 13th before retiring with damage following a collision with Senna.