Second was claimed by Mark Webber, after the Australian staged his own late rally following a modest morning in the title-defending Red Bull RB9. 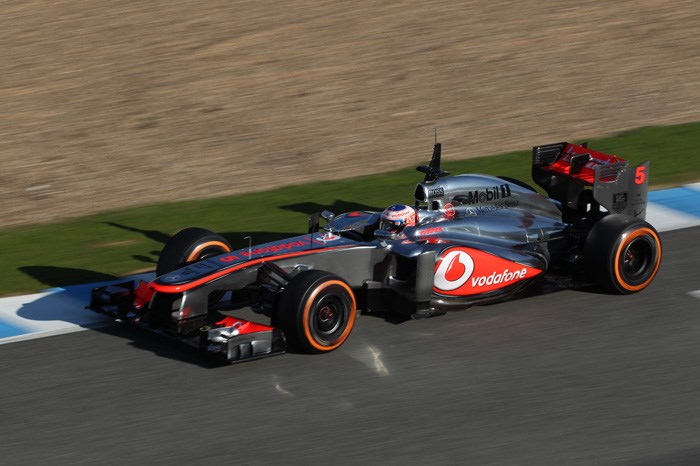 Jenson Button shrugged off early reliability woes to set the pace on the opening day of Formula 1's first pre-season test of 2013 at Jerez.

The Briton's morning ground to a halt after just three exploratory laps due to a fuel-pump failure on his McLaren, and he remained sidelined until the midway point.

Button was eventually able to resume and in the final minutes of the session clocked a 1m18.861s on Pirelli's new hard compound tyres, putting him more than eight tenths clear of the field.

Second was claimed by Mark Webber, after the Australian staged his own late rally following a modest morning in the title-defending Red Bull RB9.

Webber jumped ahead of Romain Grosjean's Lotus with a 1m19.709s, only for Button to trump that almost immediately.

That left morning pacesetter Grosjean in third, Force India's Paul di Resta fourth and Toro Rosso's Daniel Ricciardo fifth, the trio all having set their fastest times in the morning.

Di Resta clocked up more laps than any other driver, his final tally standing at 89.

Felipe Massa managed to improve in the Ferrari F138 and ended the day sixth fastest, albeit 1.6s down on Button.

On his first day testing for Sauber, Nico Hulkenberg was seventh fastest, just ahead of Nico Rosberg and the stricken Mercedes camp.

Rosberg had been setting the pace in the morning but his run - and his day - came to a premature end due to an electrical fault.

Mercedes eventually had to abandon the rest of the day as it waits for new parts. Hamilton is set to test for the first time tomorrow.

Chilton went off at Dry Sack shortly after setting his fastest time in the afternoon, with Marussia later identifying a fault with the rear suspension.