Jenson Button clinched the 2009 Formula 1 world championship by coming through to fifth in the Brazilian Grand Prix, as Mark Webber took a comfortable victory for Red Bull. 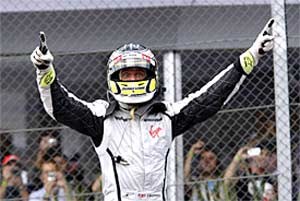 Jenson Button clinched the 2009 Formula 1 world championship by coming through to fifth in the Brazilian Grand Prix, as Mark Webber took a comfortable victory for Red Bull.

Sebastian Vettel made it up to fourth from 15th on the grid, but that was not enough to keep his title bid alive, while Button's closest rival and Brawn team-mate Rubens Barrichello was only running fourth when he had to pit with a puncture eight laps from the end, ending his last remote hope of the championship.

Behind Webber, Robert Kubica (BMW) took his best result of the year in second, and Lewis Hamilton (McLaren) came through from the tail of the field for third.

Button and Vettel's charges were immediately aided by a chaotic first lap. First contact with Vettel sent Heikki Kovalainen spinning into Giancarlo Fisichella, then the fast-starting Kimi Raikkonen
broke his front wing on the back of Webber's Red Bull as the Australian defended his line into the Descida do Lago.

Through the next kink Toyota's Jarno Trulli went wide onto the grass - later accusing Adrian Sutil of putting him there - and spun back across into the Force India, which then collected Fernando Alonso's Renault, putting all three out and prompting a safety car.

There was even more drama under the yellow, as Kovalainen took the McLaren fuel hose with him as he left the pits following repairs, resulting in a flash fire as fuel splashed out of the hose onto Raikkonen's close-following Ferrari. Remarkably both were able to continue with minimal delay.

As the stewards began investigating all of those incidents, Button and Vettel found themselves ninth and 11th in the restart queue, with Barrichello leading the race over Webber, Nico Rosberg (Williams) and Kubica.

Both Button and Vettel immediately charged forward with some aggressive passes, before getting stuck behind Kamui Kobayashi's Toyota and Kazuki Nakajima's Williams in seventh and ninth respectively.

It took until lap 24 - and several near-misses - before Button successfully dived inside Kobayashi at the Senna S. By that time his title prospects looked much better, for Barrichello had fallen from first to third at the first pitstops.

The Brawn had only managed to pull 2s clear of Webber, and when Barrichello stopped on lap 20 he emerged into the thick of the traffic and was further delayed being overtaken by Vettel. He not only lost out to Webber, but fell to third behind Kubica, with Rosberg losing a chance to also get involved in this fight when he retired on lap 26.

That settled the lead battle for the rest of the race. Webber ran a comfortable 5s ahead of Kubica, with Barrichello becoming an ever more distant third. His only hope of keeping the title fight alive was now that Button finished eighth or lower, but the Briton's excellent progress continued as he moved up to second before making the first of his two stops on lap 29.

Vettel ran a similar strategy but pitted even later, which enabled him to jump Button at the final stops, but by that time they had moved up to fifth and sixth - not good enough for Vettel but perfectly adequate for Button.

Just to underline that Barrichello's task was hopeless, he was passed for third by Hamilton ten laps from the end, then fell to eighth with a puncture - possibly thanks to a brush with the McLaren - two laps later.

Hamilton had pitted under the safety car to immediately get rid of his soft tyres, meaning he could run the rest of the race on a one stop strategy. He then had the pace to quickly move through the field, keeping up with the lighter cars, and emerging fourth behind Barrichello as others stopped.

Behind Vettel and the euphoric Button, Raikkonen recovered to sixth, with Sebastien Buemi scoring two points for Toro Rosso in seventh.

Kovalainen was ninth, with Kobayashi losing ground as others around him ran longer strategies, but muscling past Fisichella for 10th in the closing laps. Toyota's rookie escaped a frightening incident with compatriot Nakajima - who he had already banged wheels with through the Senna S - that saw the Williams have its front wing swiped off on the rear of Kobayashi's defensive Toyota as it came out of the pits. Nakajima lost control on the grass and speared into the Descida do Lago barriers, but was unhurt.