Button and Schumacher on top in Australia 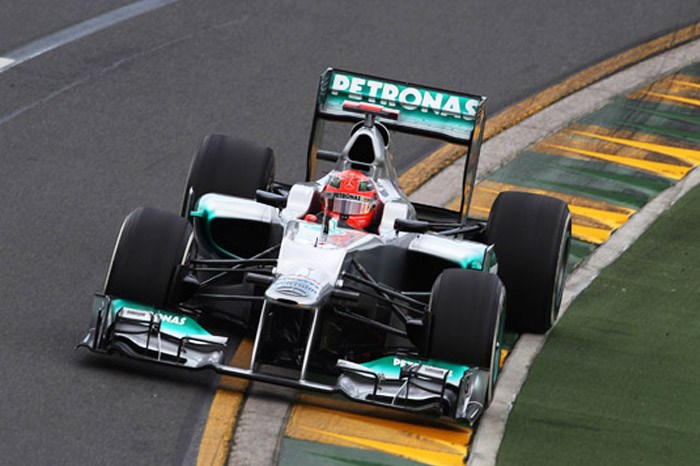 Damp conditions during both sessions early on meant relatively little serious running, with Button going quickest by 0.245 seconds over team-mate Lewis Hamilton in the first session.

World champion Sebastian Vettel was a quiet 11th in the second Red Bull.

Toro Rosso's Jean-Eric Vergne had the honour of leading the field out for the first time in an official session in 2012, and the Frenchman and team-mate Daniel Ricciardo had the track largely to themselves at first - choosing to rack up laps while the circuit was still drying, whereas most waited in the pits until conditions improved.

It was Ricciardo who duly logged the season's first flying lap with a 1m47.448s after 20 minutes.

Nearly an hour passed before the Albert Park circuit was in good enough shape for slick tyres. Sauber's Kamui Kobayashi - who by that time was the fastest man on intermediates - led the move to dry tyres and blew his previous benchmark away by just over five seconds.

Webber then deposed Kobayashi, who grabbed the top spot back again, but only momentarily before Schumacher began a long stint in first place, which lasted until Button put in his session-topping 1m27.560s with nine minutes to go.

Hamilton then joined his team-mate at the front with a lap 0.245s slower in the closing moments, pushing Schumacher back to third.

Alonso escaped a massive slide at the final corner on his last lap to take fourth, but his Ferrari team-mate Felipe Massa ended the morning in the gravel after putting a wheel on the grass under braking for Turn 9 with 13 minutes to go, sending the Brazilian spinning.

Nico Rosberg completed the top six for Mercedes, followed by Ricciardo, Pastor Maldonado's Williams, Kimi Raikkonen's Lotus and Kobayashi. Raikkonen only got out in the final few minutes after a long pause in the Lotus garage having his steering rack changed.

HRT endured what has become its traditional very tough start to an F1 season with neither car setting a flying lap. Pedro de la Rosa's machine was not ready in time to leave the pits during the session, while rising engine temperatures led to Narain Karthikeyan's car cutting out on the backstretch after 32 minutes.

In the second session, it was the seven-time champion who led the timesheets by setting his 1m29.183s lap on the last of the session, on a track that was improving in terms of grip with every second of running, but in spite of being at the right end of the roulette wheel the Mercedes driver had look good for it throughout the last frantic 20 minutes of running to be fair.

In the end Schumacher denied Nico Hulkenberg another giant-killing headline, and the young German had to settle for second best this time. Sergio Perez was third fastest for Sauber.

Torrential rain during the break between the two sessions rendered much of FP2 largely pointless, and it was Perez and Schumacher that were nominally fastest on the intermediates by the time the teams reached a natural pause around two thirds of the way through the practice.

As Albert Park fell silent, it was clear many of the teams were protecting their new cars from the walls that enclosed the slippery surface - aware perhaps that spares are at premium at this point in the season.

Only in the last 20 minutes did they deem it safe enough to venture back out and the session finally came alive when it was dry enough to run on slicks.

And during this period it was Hulkenberg who starred as he embarked on a battle with Schumacher for top honours - the Force India driver on the soft tyres and the Mercedes using mediums. Hulkenberg's team-mate Paul di Resta also had a brief spell at the top of the times before fading to sixth.

Fernando Alonso was fourth fastest in the Ferrari ahead of Kamui Kobayashi – who had a wild ride at the final turn on his last lap.

Neither McLaren driver featured much in the session as they preferred to stay out of the danger zone, and both ended up behind Timo Glock's 12th placed Marussia.

There were several visits to the grass and run-off for much of the field, including Perez, Jean-Eric Vergne, Webber and Kovalainen, but no contact with the barriers.