Bustling weekend for Aditya in Austria 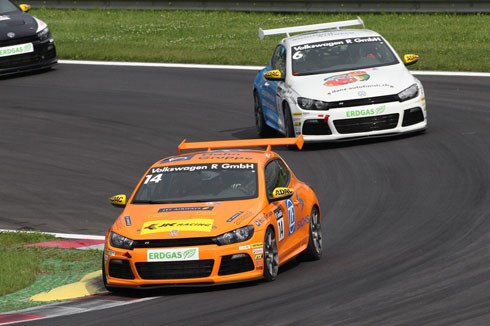 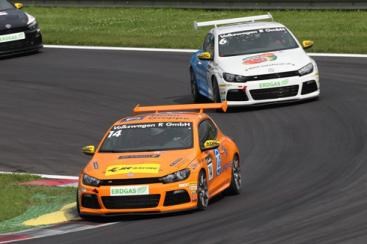 The second round of VW Scirocco Cup 2011 saw the racers take to the newly renovated A1-Ring, now known as Red Bull Ring in Spielberg, Austria. Like the season opener, this round also saw the one-make series supporting the German DTM championship which returned to the venue after over a decade.

Despite being a relatively straightforward track, elevation changes transform it into an extremely challenging endeavour. Add unpredictable weather to the mix and you’ve got yourself a thrilling weekend of racing.

Friday practice kicked off under wet conditions but the track slowly dried as the session progressed. At the end of the 30 minute countdown, Aditya found himself sixth in the timesheets. However, the qualifying session on Saturday was dry and given the limited amount of ‘push to pass’ allowed, two hot laps was all each driver could deliver. Aditya found himself third on the grid- missing out on a front row spot by two-tenths.

Still a lot could be done from third- considering the unpredictable weather in the mix. The race start was once again wet and a handful of shunts saw the safety car being deployed on the opening lap itself.  It took three laps to clear the track and once the circuit went green with eight laps to the flag, Aditya tried to lunge past second-place runner Daniel Llyod but slippery conditions led to a contact between the two, pitching Lloyd into a spin. Aditya lost a place too but did well to get it back before he chased down race leader Mateusz Lisowski.

However, the stewards didn’t take a very kind view of the incident and handed a drive-thru to Aditya with three laps go, throwing a spanner in the works for the Indian driver fighting for his first win of the season. Serving his penalty left Aditya 12th and he was thereafter able to make one place and finish 11th.

A herculean task lay ahead for race two- he was starting way back in 11th and had to fight his way through a very closely matched midfield due to the fact that top eight finishers from race one were in a reverse grid for race two.

Another one of his now-trademark catapult starts saw him gain a place into turn one whilst making short work of two other drivers by turn three. Now eighth, the waiting game began as top finishers from race one fought it out, exhausting their push-to-pass counts in the process. With the race half-way, Aditya started to claw his way up the field and managed to settle into fourth with four laps to go. Next up, Dennis Trebbing and a third place finish was in his sights but Aditya wasn’t able to get close enough to challenge the American and thus had to settle for fourth.  In retrospect, it is easy to fathom the result a P7 start would have netted had he finished the first race in second place!

At the end of a crazy weekend, an exhilarated Aditya said, "This has to be one of the best races I've ever driven! I knew I had to use the push-to-pass wisely if I had any hope of passing those four cars and my plan worked perfectly. I want to thank my engineer and driver coach Ronny and Philip for all their efforts, without which this result would have been hard to achieve. I'm also extremely grateful to my sponsors JK Tyres, Amante, Jet Airways and Virtu Technologies."

The second Indian on VW Scirocco Cup grid, Sailesh Bolisetti had another steady weekend as he got to grips with a left-hand drive car and another unfamiliar circuit. He qualified a credible 18th out of 27 cars and managed to climb up to finish 15th in race one. Starting from 15th in race two, he made up one position and held on to finish 14th. Looking at the progression of the 2010 Polo Cup India champion, it is only a matter of time before he gets close to top 10.