Di Grassi sent himself and Buemi into the barriers at Turn 3 on the opening lap. 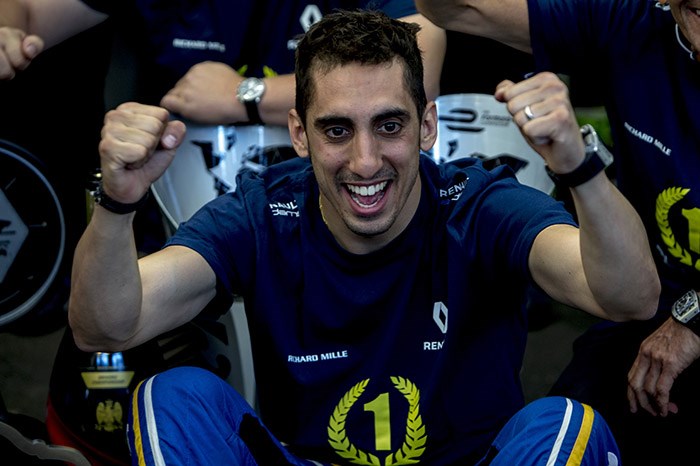 Sebastien Buemi clinched the 2015/16 Formula E title in the Battersea Park season finale despite being taken out at the start by championship rival Lucas di Grassi.

Di Grassi sent himself and Buemi into the barriers at Turn 3 on the opening lap, allowing Nico Prost into a lead he would convert into a second victory of the weekend.

The accident tore off Buemi's rear wing and pitched di Grassi nose-first into the barriers, breaking his front-right wheel.

Both resumed, with Buemi continuing for a short while at the back before being forced to pit with his damage and di Grassi limping back to change cars.

With the drivers level on points going into the finale, the race was turned into a battle for the two points for fastest lap.

Buemi needed to secure those points to become champion, with di Grassi otherwise set to pick up the title on countback to third-place finishes, and the duo played a cat-and-mouse game for the remainder of the race.

Di Grassi posted a 1m24.9s then set the best first and second sectors of the race with three laps remaining, but could not complete the lap at that pace and fell a tenth shy.

With his rival returning to the pits and getting out of his car, Buemi claimed the points and the championship with some kind of flourish by going even quicker and ending the race with a 1m24.150s.

Prost somehow avoided getting caught up in the first-lap shunt despite being side-by-side with di Grassi heading into the braking zone.

He made the most of his good fortune by scarpering clear to a second win of the weekend.

The dominant victory, secured by 7.6 seconds over Daniel Abt despite a trio of safety cars, also earned the Frenchman third in the standings and helped make certain of Renault e.dams' success in the teams' championship.

Jerome d'Ambrosio claimed a shock third place, benefiting from a trio of time penalties applied to three drivers ahead of him on the road.

Jean-Eric Vergne had finished a comfortable third after jumping Nick Heidfeld after the car swaps and escaping from the Mahindra over the remainder of the race.

But Vergne, Heidfeld and Antonio Felix da Costa were all handed a 50s penalty for using too much energy, dropping them behind d'Ambrosio, Loic Duval (who started last after a gearbox change), Stephane Sarrazin and Bruno Senna.