The e.dams driver, who was fastest on day three, improved to 1m31.083s to set a new category benchmark. 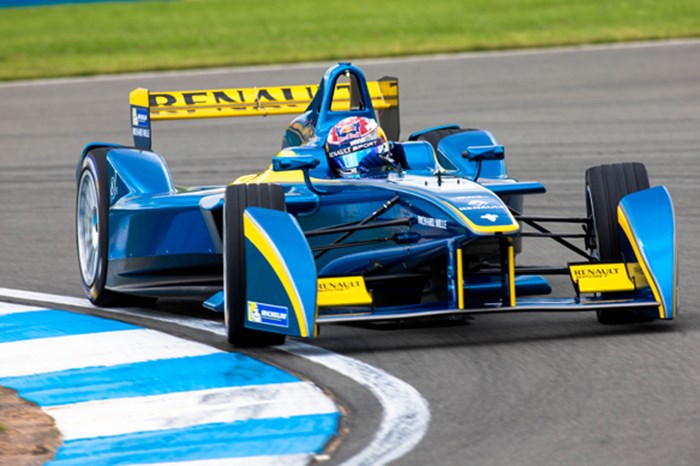 Sebastien Buemi continued to set the pace on the fourth day of official Formula E testing at Donington Park on Thursday.

The e.dams driver, who was fastest on day three, improved to 1m31.083s to set a new category benchmark.

Abt's Lucas di Grassi had bettered Buemi's previous fastest time with a 1m31.282s run in the morning session, but was pushed back to second by the ex-F1 driver's later effort.

Buemi, who has now topped three of the four days of Formula E testing so far, said: "This morning we concentrated on race pace, putting in lots of laps and finding the best balance with the temperatures of the tyres and battery.

"We continued to focus on race pace in the afternoon, as well as qualifying runs. Credit again has to go to the team for giving me such a good car and the confidence to push and we'll now see how we can improve for the next one."

Di Grassi, who ended up almost 0.4s clear of China Racing's Jerome d'Ambrosio, believes the test is more important for understanding the car's systems, rather than going for outright pace.

"We are making good progress every test and every time I get in the car," said di Grassi.

"We understand the car a little better but it's difficult to do a lot of representative work at Donington compared to some of the circuits we will race on throughout the season.

"The most important thing is to learn about the battery, the motor and tyre pressures but not necessarily fine tuning set-up at this track."

Andretti Autosport's Scott Speed and Virgin Racing's Sam Bird were the only other drivers under 1m32s, while ex-F1 drivers Nick Heidfeld (Venturi), Jarno Trulli (Trulli) and Bruno Senna (Mahindra) rounded out the top 10.

The fifth and final test is scheduled to take place on August 19.