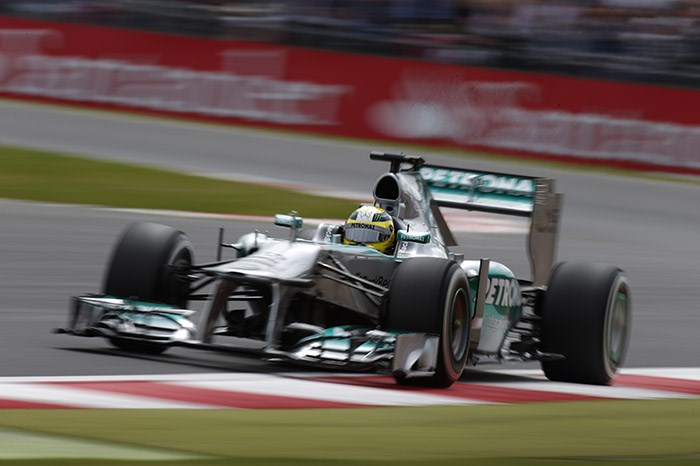 Rosberg's Mercedes team-mate Lewis Hamilton was leading until he became the first man to suffer a tyre blow, with Vettel then controlling the race until his Red Bull lost drive in the closing stages.

That set up a thrilling finale as Vettel's team-mate Webber, who had fallen to 15th on lap one, hunted down Rosberg, while Fernando Alonso and the recovering Hamilton charged past Kimi Raikkonen into third and fourth.

Hamilton had established a two-second lead over Vettel, who jumped Rosberg off the line, by lap seven, when his left rear tyre blew going down the Wellington straight.

That was followed soon after by a seemingly identical failure for Felipe Massa. The Ferrari driver had thrust from 11th on the grid to fifth at the start and was pushing Adrian Sutil for third when his tyre gave well while accelerating out of the The Loop.

When Jean-Eric Vergne's left rear tyre also exploded on the approach to Stowe, the safety car came out for seven laps, with engineers urging their drivers to avoid the kerbs.

Vettel kept Rosberg at arm's length once the race restarted. Sutil ran third until leaving his second pitstop too late and being jumped by Raikkonen, Alonso and Webber. The Australian was on a charge from 15th after a slow start and a first-corner brush with Romain Grosjean, and overtook Alonso going into the closing stages.

Just as the result seemed settled, Vettel ground to a halt on the pits straight with a loss of drive.

With the stranded Red Bull prompting a safety car, Rosberg dived in for a third tyre stop and rejoined still ahead of Raikkonen. Webber and Alonso also went for tyres and dropped to fifth and eighth, elevating Sutil and Daniel Ricciardo to third and fourth.

Webber made sublime use of his fresh tyres to quickly pick off Ricciardo and Sutil, then battle past Raikkonen.

By the final lap the Red Bull was within a second of Rosberg, who held on to win by seven tenths of a second.

Alonso also made rapid progress on his new rubber, dodging the McLaren of Sergio Perez as it became yet another tyre-blow victim, then fighting through to third.

The recovering Hamilton followed through, demoting Raikkonen - who had questioned Lotus's decision not to pit under the late safety car - to fifth.

Massa climbed back to sixth after his puncture, with Sutil and Ricciardo pushed back to seventh and eighth ahead of Paul di Resta (from the back of the grid) and Nico Hulkenberg.

Jenson Button had been on course for points for McLaren until the final laps, when he was elbowed down to 13th.