Rosberg's pole lap was 1.6s faster than second-placed Sebastian Vettel, who had not set a time on his first run. 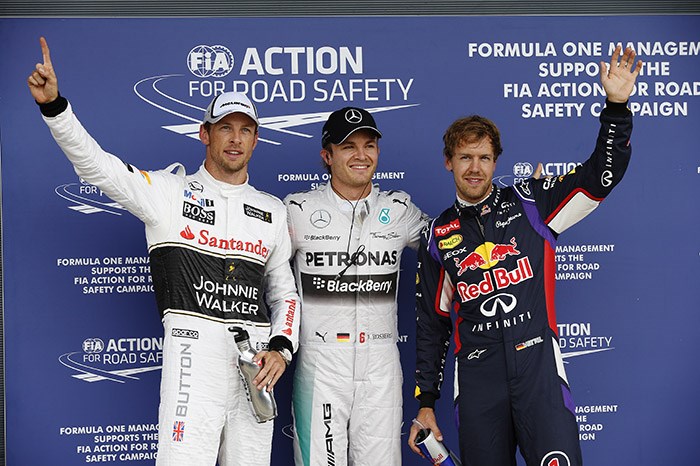 With rain coming and going throughout the qualifying hour, the first runs in Q3 were all affected to varying degrees by rain in the final sector, with Hamilton initially going fastest on slicks.

But conditions had dramatically improved by the final seconds of qualifying as drivers attempted their second runs and with Hamilton abandoning his lap after complaining that it was too slippery, he tumbled down the order late on as others improved.

Rosberg's pole lap was 1.6s faster than second-placed Sebastian Vettel, who had not set a time on his first run after abandoning his lap because of the rain.

Jenson Button was third fastest thanks to his late lap ahead of the Force India of Nico Hulkenberg, the German briefly taking top spot after being the first to improve on the second runs.

Kevin Magnussen, the last of the five drivers who did improve on their second runs, was fifth fastest ahead of Hamilton.

Sergio Perez, Daniel Ricciardo, Daniil Kvyat and Jean-Eric Vergne had held positions third-to-seventh until moments before the end of the session thanks to their first run times, but plummeted as other drivers completed their final laps.

Romain Grosjean was the fastest of those to drop out in Q2, ending up 11th.

But the big surprise in the middle segment of qualifying, which started in intermediate conditions before everyone switched to slicks, was Marussia.

Having both escaped Q1 after good performances in mixed conditions, Jules Bianchi and Max Chilton produced the best qualifying performance for the team since it came into F1 in 2010, finishing 12th and 13th.

Esteban Gutierrez was 14th after losing his Sauber on the exit kerb at Brooklands corner and being spat onto the grass at the entry to Luffield and backing into the wall.

Behind him was Pastor Maldonado, who was forced to stop late in the session after suffering an engine problem.

Adrian Sutil was 16th fastest, making Q2 but being unable to participate as he had spun into the gravel.

Ferrari and Williams suffered Q1 disasters, with Valtteri Bottas, Felipe Massa, Fernando Alonso and Kimi Raikkonen all being knocked out.

Q1 had started in intermediate conditions, but all four were unable to put together good enough laps having switched to medium-compound Pirellis.

Bottas and Massa, who were among the latest drivers to take slick rubber, ended up 17th and 18th thanks to a combination of yellow flags and light rain returning late on.

Alonso was 19th after losing the rear on turn-in to Brooklands and having to take to the runoff area on what should have been his best lap.

Team-mate Kimi Raikkonen was 20th, ahead only of the Caterhams of Marcus Ericsson and Kamui Kobayashi.

Neither Caterham driver set a time on slicks, with Kobayashi suffering a car problem after a single lap on mediums and Ericsson suffering a couple of offs during the session.

The stewards will investigate an impeding incident involving Pastor Maldonado and Sergio Perez, which occurred during Q2, after the session..