Ricciardo had topped the morning session for Torro Rosso. 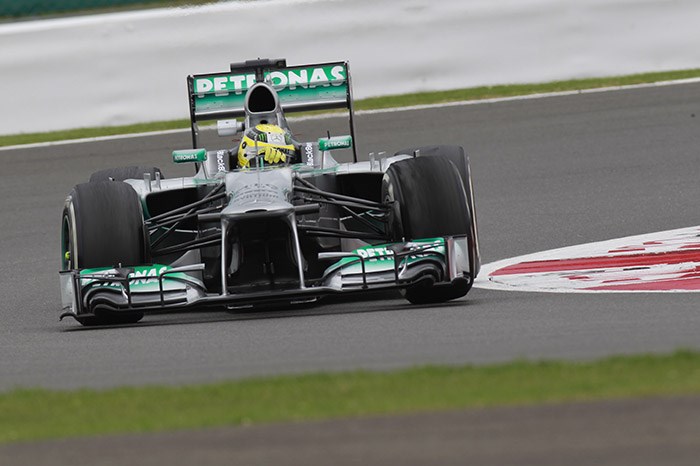 Nico Rosberg put Mercedes on top in a mostly dry second practice session for the British Grand Prix at Silverstone.

After the morning downpour and consequent dearth of running, teams wasted no time in getting straight out on a still-damp track at the start of the afternoon.

The circuit was dry enough for slicks within 10 minutes and Rosberg was among the pacesetters from the outset.

Force India's Adrian Sutil, morning practice leader Daniel Ricciardo of Toro Rosso and world champion Sebastian Vettel all had multiple spells on top as the times settled down over the following half an hour.

But then with 40 minutes remaining, Rosberg put in a 1m32.248s to claim a first place he would not lose, as teams then made their habitual switch to longer runs.

Vettel was second at that point, but his Red Bull team-mate Mark Webber demoted him to third when he rejoined after a long spell in the garage.

Force India took fourth and eighth on the first day of running at its home track, with Paul di Resta quicker than Sutil by the end.

Di Resta's fellow Briton Lewis Hamilton was just one place further back in fifth, but Jenson Button's McLaren was only 11th.

Lotus duo Romain Grosjean and Kimi Raikkonen were down in ninth and 13th.

Ferrari had a disappointing session too. Fernando Alonso was only 10th, while his team-mate Felipe Massa crashed at Stowe after just seven laps.

The Brazilian ran slightly wide through the corner when the track was still a little damp and spun back into the opposite wall, mangling the Ferrari's front end.