Renault has announced that team boss Flavio Briatore and engineering chief Pat Symonds have parted company with the team and that it will "not dispute" the allegations of race-fixing when it appears before the World Motor Sport Council next week. 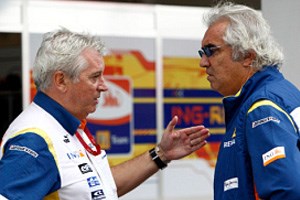 Renault has announced that team boss Flavio Briatore and engineering chief Pat Symonds have parted company with the team and that it will "not dispute" the allegations of race-fixing when it appears before the World Motor Sport Council next week.

The team had been accused of asking driver Nelson Piquet to crash deliberately during last year's Singapore Grand Prix in order to cause a safety car period that would work to his team-mate Fernando Alonso's advantage. The Spaniard went on to win the race.

"The ING Renault F1 Team will not dispute the recent allegations made by the FIA concerning the 2008 Singapore Grand Prix," said a statement from the team.

"It also wishes to state that its managing director, Flavio Briatore and its executive director of engineering, Pat Symonds, have left the team."

"Before attending the hearing before the FIA World Motor Sport Council in Paris on 21 September 2009, the team will not make any further comment."

Shortly before losing his drive with Renault, Piquet approached the FIA with the allegation that Briatore and Symonds had asked him to cause a deliberate accident that would bring out the safety car in Singapore, and that his heavy crash on lap 14 of the race had therefore been pre-planned.

Alonso - who had been a contender for pole until a qualifying fuel pump failure left him only 15th on the grid - had made a very early pitstop just before the caution caused by Piquet's crash and duly vaulted to the front of the field, from where he delivered Renault's first victory of a difficult season.

FIA investigators quizzed Briatore, Symonds and other team members over the incident during the Belgian GP weekend, and subsequently announced that the team would face a World Motor Sport Council hearing in Paris on 21 September.

Evidence, including Piquet's statement, telemetry details and radio transmissions, was leaked to the media during last weekend's Monza event, which also saw Renault announce that it would take legal action against Piquet and his triple world champion father Nelson, accusing both of blackmail.

The saga then took another twist when it emerged that the FIA had offered Symonds immunity at the hearing in exchange for full disclosure of the facts surrounding the Singapore incident.

As the Renault team - rather than Briatore and Symonds themselves - has been charged over the allegations, today's announcement by the team is unlikely to have any bearing on next week's hearing.