The Red Bull driver utterly dominated a Q3 session delayed by 45 minutes due to intense rainfall. 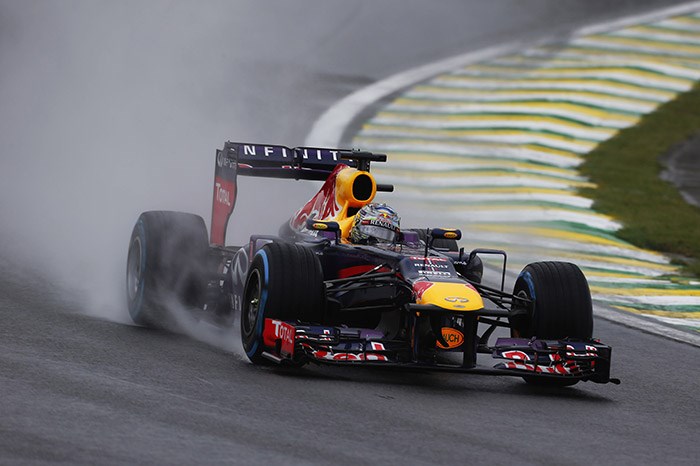 Even an Interlagos downpour could not stop Sebastian Vettel as the 2013 Formula 1 champion took Brazilian Grand Prix pole by six tenths of a second.

The Red Bull driver utterly dominated a Q3 session delayed by 45 minutes due to intense rainfall.

Although Romain Grosjean briefly held provisional pole by virtue of taking intermediates before anyone else, Vettel's first lap on that rubber put him 1.1s clear of all his rivals.

Nico Rosberg and Fernando Alonso were left to battle for second place, with the Mercedes eventually taking it and trimming Vettel's advantage to 0.623s.

Third was still an excellent result for Alonso given Ferrari's recent form, as he held off Mark Webber by 0.063s.

Lewis Hamilton was half a second off team-mate Rosberg's pace in fifth, while Grosjean fell back to sixth for Lotus.

Toro Rosso starred in the wet and got both cars into Q3. Daniel Ricciardo and Jean-Eric Vergne will share row four, beating Felipe Massa's Ferrari and Nico Hulkenberg's Sauber.

Conditions had fluctuated through both Q1 and Q2, with the latter getting ever wetter.

That meant early times largely stood, bar Hulkenberg managing to jump into 10th at the expense of Heikki Kovalainen, who missed out by 0.015s.

Both Force Indias, both McLarens and Valtteri Bottas's Williams also departed in Q2.

Sergio Perez crashed at the right-hander on the exit of the Descida do Lago on his final lap, but still beat McLaren team-mate Jenson Button to 14th.

Q1 appeared to be following a similar pattern until a late improvement in track conditions allowed Vergne to escape the drop-zone.

That pushed Pastor Maldonado onto the elimination list, along with Esteban Gutierrez, the Caterhams and the Marussias, with Charles Pic beating his backmarker peers by half a second.