Heavy rain before the start of the second practice session left the Interlagos track saturated. 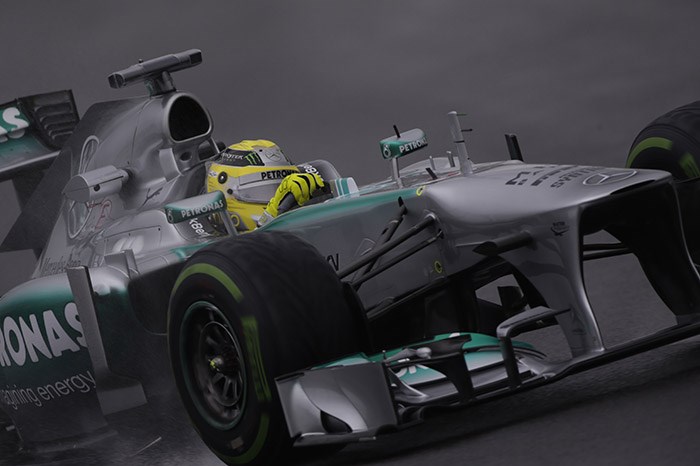 Nico Rosberg kept Mercedes at the top of the timesheets in a second wet Friday practice session for the Brazilian Grand Prix.

Heavy rain before the start of the session left the Interlagos track saturated, contributing to a general dearth of action that prevailed until a frantic final 10 minutes.

The initial situation was exacerbated as the rain abated and conditions entered the uncertain window between wets and intermediates, with those who did venture out being warned about overheating problems on their wets.

Such circumstances meant that only six drivers set a time over the opening half hour, while seven drivers - among them Sebastian Vettel, Fernando Alonso and Lewis Hamilton - still had to set a time at the hour mark.

For a long while Rosberg's early 1m28.873s was therefore good enough for top spot, but Alonso helped breathe life into the session when he headed out on intermediates 20 minutes from the end and immediately went third.

That provided the encouragement for Felipe Massa, Vettel, Hamilton and the rest of the pack to also emerge on intermediates, with times tumbling as a result.

Sebastian Vettel kicked off the surge when he demoted Rosberg with a 1m27.993s, at the time seven tenths clear of the field.

He extended that advantage further, while behind him Webber also improved to move into second and complete a Red Bull one-two two minutes from the end.

Rosberg still had time to respond however, and duly disrupted the Red Bull party by reclaiming top spot with a 1m27.306s.

That was more than 0.8s clear of team-mate Hamilton, who clinched fifth on his final flyer. The Briton had earlier spun in the treacherous conditions.

Daniel Ricciardo and Romain Grosjean completed the top 10, ahead of Alonso, Esteban Gutierrez and Paul di Resta, back in the Force India after James Calado took over driving duties for first practice.