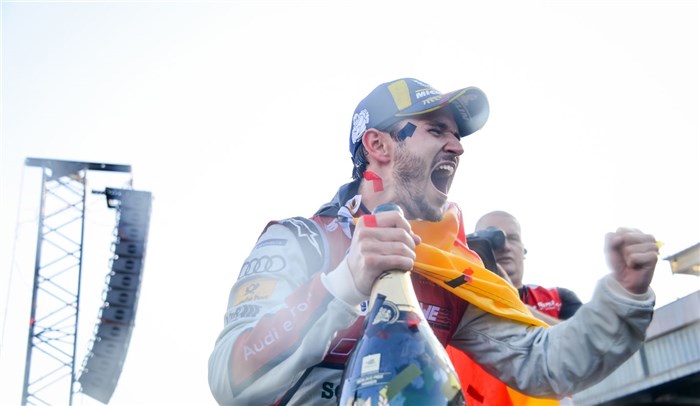 It was an all-German affair at this weekend’s Berlin ePrix, with Daniel Abt taking the win from pole in his Audi. The podium was rounded out by Abt’s teammate Lucas di Grassi and Techeetah’s Jean-Eric Vergne. The French driver extended his lead to 40 points over Sam Bird, who could only manage seventh place in Berlin.

Abt got a clean start from pole and led into turn one, while fellow front row starter Oliver Turvey had to defend from a hard charging Vergne. Dragon racing driver Jerome D’Ambrosio then drove around the outside of Vergne to secure third place, and remained there for the opening stages of the race.

Abt then began to pull away from the field, as di Grassi got past d’Ambrosio. The Brazillian then passed Vergne and Turvey on successive laps, to slot into second place. Turvey was the first of the front-runners to come into the pits on lap 22, with Buemi and Vergne following suit one lap later.

Meanwhile, race leader Abt was forced to wait for Buemi to enter his pit-box before he could rejoin the race, which allowed di Grassi to cut the gap down to a slender 0.6 seconds. For a moment it looked as though there would be a battle for the victory, but Abt was able to re-establish his lead and pull away comfortably to win the race by nearly 7 seconds.

Behind him, Vergne, who had lost out to DAMS driver Sebastian Buemi in the pits, fought back to reclaim third place. Turvey came home in fifth, ahead of Jaguar Racing driver Mitch Evans.

This marks Abt’s second Formula E victory, after his win in Mexico City earlier this year. He will be hoping to continue this run of form into the next race Zurich in three weeks time.