Rosberg has now closed the gap to Hamilton in the F1 title race to nine points. 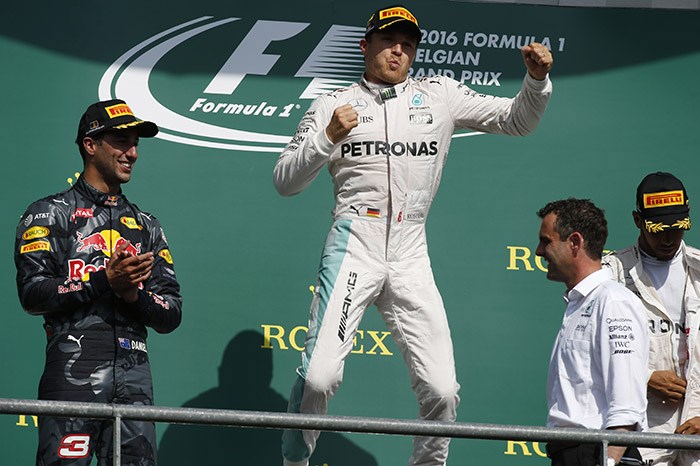 Nico Rosberg clinched his first Belgian Grand Prix victory as Mercedes Formula 1 team-mate Lewis Hamilton claimed a podium from 21st on the grid in a chaotic race at Spa.

Rosberg has now closed the gap to Hamilton in the F1 title race to nine points, but would have been hoping for more given the reigning champion's back-row start due to numerous penalties accrued for three power unit changes.

Red Bull's Daniel Ricciardo was sandwiched by the Mercedes duo to solidify his third place in the drivers' standings ahead of Ferrari pair Sebastian Vettel and Kimi Raikkonen, who could only manage sixth and ninth following numerous incidents.

The field was reduced to 17 cars within just five laps and was red-flagged on lap nine for barrier repairs after a frightening crash that sent Renault's Kevin Magnussen to hospital.

At the start, Red Bull's Max Verstappen was slow away from second and swallowed up on the short run down to the La Source hairpin by both Raikkonen and Vettel.

As Vettel dived down the inside of Raikkonen and Vettel turned in, Raikkonen was left with nowhere to go in the middle and the trio made contact.

Vettel spun to the back, while Verstappen and Raikkonen were forced to pit due to damage sustained, with the Ferrari developing a small underside fire to add to the drama.

Later on the opening lap Manor's Pascal Wehrlein ran into the back of Jenson Button's McLaren coming out of Les Combes, with both retiring.

Toro Rosso's Carlos Sainz Jr was next out on lap two after sustaining a puncture along the Kemmel straight, and although the Spaniard tried to continue, he only succeeded in further damaging the car before pulling off track.

Sauber's Marcus Ericsson, who had started the race from the pitlane due to the team working on cooling issues, also soon retired after losing sixth gear.

Penalised tail-end starters Fernando Alonso and Hamilton had reached 10th and 11th by lap six, when Magnussen ploughed into the Raidillon barrier.

Hurtling up through Eau Rouge, Magnussen appeared to take too much kerb on the exit, sending the Dane into a high-speed spin across the track before ramming into the wall, resulting in a safety car period.

A flurry of stops for fresh tyres followed over the first two laps under yellow, promoting Alonso and Hamilton up to fourth and fifth as they had no need to change rubber given they had started on the mediums at the back.

But with the barriers severely damaged, FIA race director Charlie Whiting took the decision to red flag the race for 17 minutes to allow repairs to be carried out.

The running order at that stage was Rosberg ahead of Ricciardo, Force India's Nico Hulkenberg, Alonso and Hamilton, with Vettel 11th, Verstappen 16th and Raikkonen 17th.

Raikkonen and Verstappen would make contact again soon after the restart.

When Verstappen blocked Raikkonen on the following lap at high speed down the Kemmel straight, the Finn again expressed expletive-laden anger.

Up front, Hamilton moved up to third on lap 18 of the 44 by passing Hulkenberg into Les Combes.

A slow pitstop three laps later dropped Hamilton to ninth, but as those ahead made their stops soon afterwards he rose back into the top three behind Rosberg and Ricciardo.

The out-of-sequence championship leader then had to overtake Force India's Sergio Perez and Hulkenberg again after his third stop to clinch the final podium position, as Rosberg took the chequered flag by 14.1s from Ricciardo.

Hulkenberg and Perez finished fourth and fifth, bringing Force India ahead of Williams to fourth in the constructors' championship by two points.

The recovering Vettel and Alonso were sixth and seventh, with Williams pair Valtteri Bottas and Felipe Massa eighth and 10th either side of Raikkonen.

Verstappen tried a different strategy for his comeback drive but could only reach 11th.

On his F1 debut, Esteban Ocon held off Felipe Nasr to claim 16th.