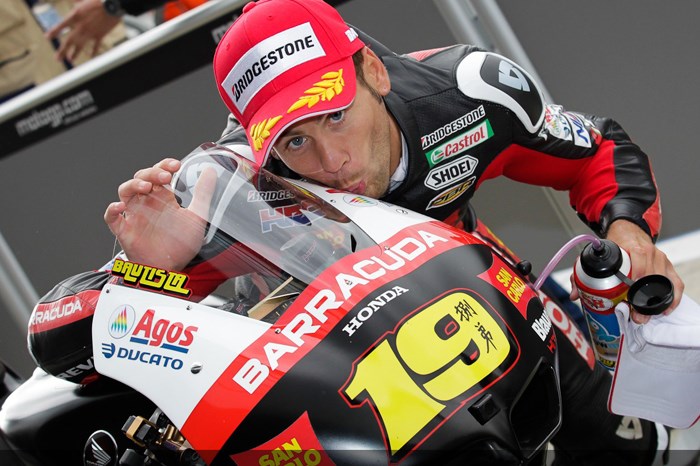 The 27-year-old Spaniard, who is set to start his 37th premier class grand prix on Sunday, hit the front with 15 minutes of the hour remaining as his 2m03.303s lap put him a tenth of a second ahead of Yamaha's Ben Spies.

Spies went out to challenge for pole a few minutes later, but was caught out at the Maggotts/Becketts complex as the rain began to fall and ran off the track, ruining his lap.

Despite the track becoming damp several riders, including Casey Stoner and Jorge Lorenzo, went out in search of improvement. Neither managed to move up the order though, allowing Bautista to give the Gresini Honda squad its first pole since last year's Dutch TT.

Dani Pedrosa was fifth for Honda with Pramac Ducati rider Hector Barbera a superb sixth on the best of the Ducatis.

Factory riders Nicky Hayden and Valentino Rossi had near identical crashes at the entrance to Club during the session and could do no better than seventh and 10th. They were split by Tech 3 Yamaha rider Andrea Dovizioso and LCR Honda man Stefan Bradl.

Aleix Espargaro was the best of the CRT riders, the Spaniard putting his Aspar Aprilia 11th, a spot ahead of his team-mate Randy de Puniet.