Round 2 at the MMRT ended up being a rather chaotic affair, with Bangalore Racing Stars ultimately shining through and being crowned champions of Season 1. 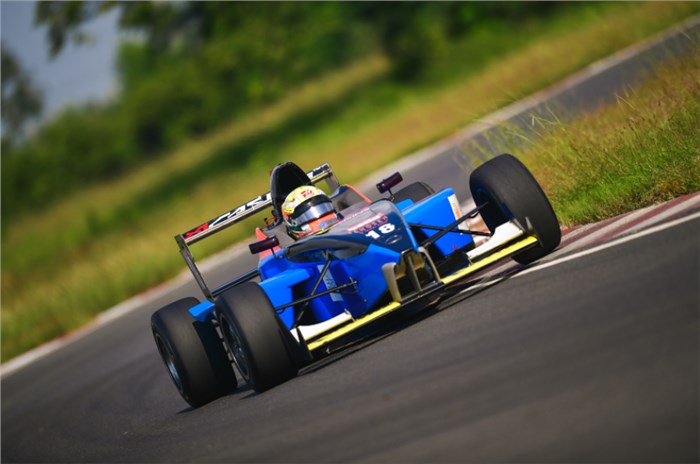 After two weeks of racing, the inaugural season of the X1 Racing League wrapped up at the Madras Motor Race Track (MMRT). After securing some strong results at the season opener at the Buddh International Circuit (BIC), Bangalore Racing Stars and Mumbai Falcons managed to carry forward their strong form in the final round as well. However, with a total of four wins in seven races, Bangalore Racing Stars managed to clinch the inaugural X1 Racing League championship.

The X1 Racing League endured a shaky start at the BIC, with a major complaint being that the cars (which are based on the now-decade-old Formula BMW chassis) looked rather underwhelming on the circuit which was originally built for Formula 1 cars. With that in mind, the twisty confines of the MMRT should have suited these cars better, and more importantly, been less punishing on the engines. But that wasn’t the case.

In fact, the final round ended up being a rather chaotic affair. The series had to cancel all running on Saturday, citing logistical issues, and, as a result, the round was condensed into three races, all of which were held on Sunday. However, half the runners ended up having to pull out in the first race itself – a majority of the retirements caused by engine issues. Additionally, the race saw a lengthy safety car period as the marshals struggled to clear Pippa Mann’s car that halted on track due to an engine blowout. Mumbai Falcons’ car 1, driven by Kush Maini and Mikkel Jensen, initially led from pole but then had to serve a drive-through penalty for jumping the start. As a result, the Bangalore Racing Stars duo of Arjun Maini and Oliver James Webb inherited the lead, and went on to win the race.

Race 2 followed a reverse grid format, but with a significant portion of the field out after the first race, it saw every team field just one car each. AD Racing Delhi’s car 16, piloted by Gaurav Gill and Raghul Rangasamy, started the race from pole position, but the Mumbai Falcons soon managed to take the lead. But it wasn’t a trouble-free race for the team as their only remaining car ended up making contact with DG Races Ahmedabad’s car 45 in the pit lane following a chaotic driver swap. Nevertheless, Mumbai Falcons went on to win the race by a mammoth 19.415 seconds. AD Racing Delhi (Gill and Rangasamy) ended up having to settle for 2nd place, and Bangalore Racing Stars (Kush Maini and Jensen) finished 3rd.

Race 3 was supposed to follow a relay format, but since none of the teams could field a second car, the grid was instead determined based on each team’s fastest lap in Race 1. Mumbai Falcons’ Arjun Maini and Webb once again dominated the race to clinch victory ahead of Bangalore Racing Stars (Kush Maini and Jensen) and Blackbirds Hyderabad (Vitantonio Liuzzi and Akhil Rabindra).

With its inaugural season done and dusted, it is clear that the X1 Racing League yet has some fine tuning to do if it does aim to be sustainable as a series. A relative lack of organisation and the complicated formats (including throwing in rather lengthy driver swaps in what is already a relatively short race) are some problem areas that will need to be addressed. But perhaps the most pressing concern for the series right now is the cars; after all, having half the grid retire in the first race of the day itself hardly bodes well for a series that aims to position itself as the future of motorsport in India.