Sebastian Vettel got closest for Red Bull with a 1m32.584s, just ahead of Fernando Alonso's Ferrari. 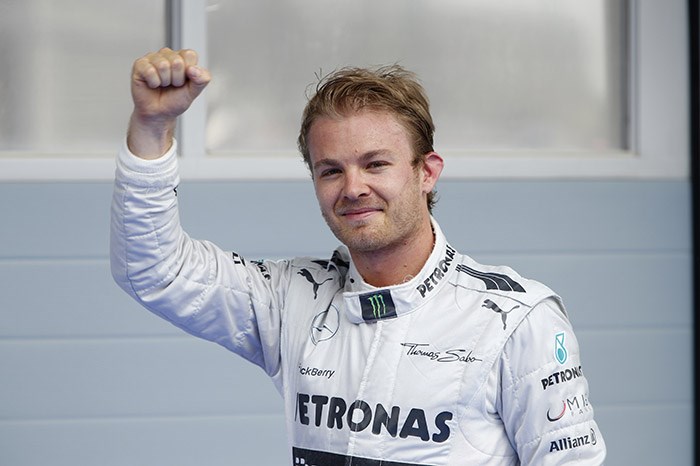 Mercedes had not looked like an outright frontrunner during practice, but Rosberg set a banker 1m32.4s lap at the start of Q3 and it proved impossible to beat.

Sebastian Vettel got closest for Red Bull with a 1m32.584s, just ahead of Fernando Alonso's Ferrari.

Rosberg then made his pole absolutely certain, improving to 1m32.330s to clinch the top spot by over 0.2 seconds.

His team-mate Lewis Hamilton was 0.4s slower in fourth place. He will lose five places for having a gearbox change prior to the session.

Fifth position will also change post-session. Mark Webber took the spot for Red Bull, but faces a three-place penalty for his collision with Jean-Eric Vergne in China.

Ferrari put Felipe Massa on hard tyres for Q3 and he took sixth place, followed by the Force Indias of Paul di Resta and Adrian Sutil. The latter only just made it into Q3 with a late charge.

Friday pacesetter Kimi Raikkonen was only ninth in his Lotus.

McLaren was ecstatic to see Jenson Button reach Q3 against expectations with a last-gasp lap. The Briton chose not to do a flying lap in the pole shootout.

The late Q2 improvements lik pushed Romain Grosjean's Lotus down to 11th. The Frenchman was back in the pits at the end of the segment and his first lap had not been good enough.

The two Williams set exactly equal 1m34.425s laps in Q1, but Valtteri Bottas had got there first, so he made it to Q2 - where he took 15th - while Pastor Maldonado was left in 17th.

Esteban Gutierrez's troubles continued as he only managed 18th in qualifying, which will become last when his five-place penalty for crashing into Sutil in China is applied.

There was a change in form at the back. Driving the upgraded Caterham, Charles Pic got his team ahead of Marussia for the first time in 2013, as he beat Jules Bianchi by a full 0.9s.