Nico Rosberg had been fastest for Mercedes prior to the Ferraris' laps, and retained third, 0.134s off the pace. 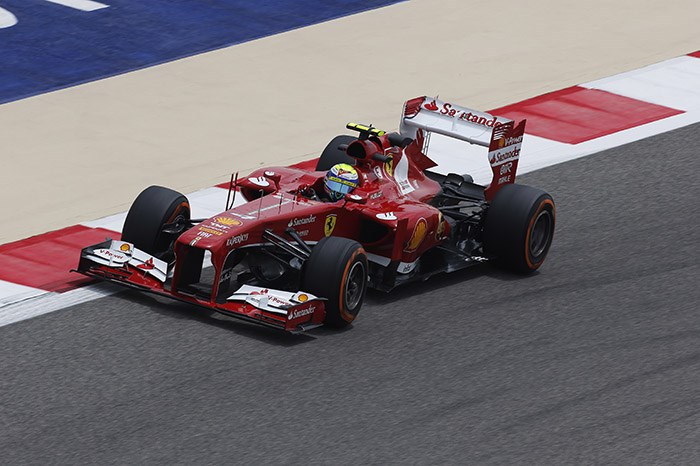 Ferrari kicked off its Bahrain Grand Prix weekend with a one-two for Felipe Massa and Fernando Alonso in Friday morning practice.

Hot on the heels of Alonso's commanding victory for the team in China, Ferrari continued to underline that its 2013 Formula 1 car is a frontrunner on merit.

In a typically cagey opening session on the dusty Sakhir track, all the frontrunners waited long into practice before actually going for flying laps, and Ferrari held off longest of all.

Nearly an hour had elapsed by the time Alonso and Massa showed their hand, and they immediately went quickest, as first Alonso did a 1m34.564s, then Massa beat it by 0.077 seconds with a 1m34.487s a few minutes later.

They duly stayed on top as everyone, as usual, focused on heavy fuel and tyre endurance for the remaining half an hour.

Nico Rosberg had been fastest for Mercedes prior to the Ferraris' laps, and retained third, 0.134s off the pace.

Sebastian Vettel was the leading Red Bull in fourth, three places ahead of team-mate Mark Webber.

Force India had a strong session. Adrian Sutil spent a while on top around the halfway point, and although he later slipped to eighth, his team-mate Paul di Resta made it up to fifth place, ahead of Jenson Button's McLaren.

Lewis Hamilton was only 13th, 1.2s slower than team-mate Rosberg, but with no sign of drama at Mercedes, the disparity appeared due to differing programmes.

Heikki Kovalainen made his F1 return in 20th place. He ended up 0.6s slower than team-mate Charles Pic in Caterham's upgraded car as he settled in. Both were ahead of the Marussias.

Rodolfo Gonzalez's GP weekend debut with Marussia was curtailed by a gearbox issue after seven laps. He brought up the rear of the timesheets, but was within 0.8s of race driver Max Chilton.

Kovalainen and Gonzalez hand their cars back to Giedo van der Garde and Jules Bianchi respectively in the afternoon.