Back from the Red!

Coming back from an almost two-year-long hiatus from circuit racing, the MRF International Challenge 2010 was the much-needed shot in the arm required to take Indian motorsport to the next level. 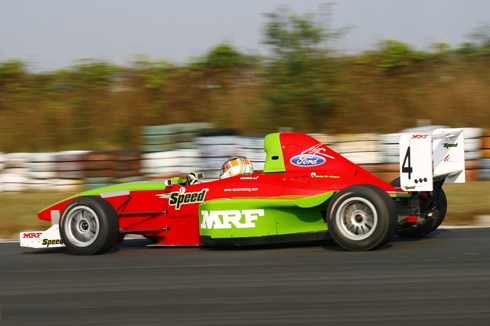 Coming back from an almost two-year-long hiatus from circuit racing, the MRF International Challenge 2010 was the much-needed shot in the arm required to take Indian motorsport to the next level. The Reds also finally returned to MMST, after MRF’s seemingly endless deadlock with JK Tyre mercifully came to a conclusion. Both tyre manufacturers mutually agreed to contribute at different levels in order to ensure overall growth of motorsport in the country.

The cynosure of the weekend was the long-awaited MRF Formula 1600 which made its race debut and is now officially the premier class in four-wheeler circuit racing in India. Ashwin Sundar, who had already posted an unbelievable 1:40:875 during Round 1, once again dominated proceedings from qualifying, with the exception of Race 2 which saw Ajay Kini taking the chequered flag in the reversed grid. The 600cc Superbike category saw the lap record being blown to smithereens by Welsh rider David Jones, who clocked 1:43:836 – almost a second quicker over the time registered by Petronas-rider Decha Kraisart at the FIM Asia GP round last year.

The flagship class saw current INRC champ Gaurav Gill joining the grid along with 2009 Formula BMW Asia-Pacific Junior champion Chris Wootton, who also holds the F-BMW lap record around Sepang Circuit. Also in contention was Hyderabad driver Amer Beg, a former Canadian Rookie Karting National champion, who finished second in both races of Round 1. Troubles surfaced early for Gill in Race 1 as he faced issues with gearbox actuation on the formation lap. Things got worse for him as the lights went out and his car failed to take off the line cleanly. Ashwin made the most of his pole while Amer Beg, who started way back on Row 3, managed to slip into second in the opening lap with Chris Wootton chasing him down. However, he managed to keep the Australian reined in behind him till the chequered flag – the duo finished second and third respectively.

The top-five grid was reversed for Race 2, which resultantly saw Ajay Kini on P1. Once clear of traffic, Amer Beg and Chris Wootton immediately set out to resume their battle. Ashwin started fifth and had to fight his way up, but went too far as he spun out at C2 entry and rejoined the race in dead-last position. He managed to pressurise Chris Wootton, who cracked and went off-track, leaving the Chennai driver on the third podium spot, with Ajay Kini and Amer Beg taking one-two.

Welshman David Jones continued his class dominance unabated aboard a Triumph Daytona 675 with Irish rider and former Isle of Man Supersport winner Gavin Hunt, who was riding a Honda CBR 600RR, being his closest rival. The two, along with Hunt’s compatriot and Isle regular Roger Maher, wrapped up the top three positions.

Among Indian riders, it was M Gautham who continued to impress, followed by Satish Kumar and Alok Shashidhar in Race 1. Alok took second in Race 2 with K Srikanth finishing third.

Race 1 saw blue-smokers leaving the four-strokes in their chambers’ wake to begin with, but in a turn of events, Sumit Lucas and Sriskandarajah managed to catch up with the two-stroke pack! The outright pace of Group D bikes, which essentially should be factory stock, was extremely questionable to say the least. A protest seemed imminent, but nothing eventually surfaced. The top duo finished one-two with Shyam Shankar in a distant third. Race 2 saw a three-way fight in the Group D class, with Sarath, Sriskandarajah and Sumit at the helm of affairs. As the riders approached the final corner for the last time, Sri tried to make a move outside of Sarath with the former eventually losing control and going off-track. Sarath took the chequered flag, followed by Sumit and Emmanuel Jebaraj of Ten10 Racing.

The Yamaha underbone class was split – experts rode in the 135cc class while novice riders fought it out in the 115cc category. Being a one-make category, it was a close racing all-round with Sarath Kumar emerging on top in Race 1 of expert class, followed closely by Sumit Lucas and M Sudhakar. Among the novice riders, it was Naveen Raj and S Padmanabhan who finished one-two, with Bharath Raj in a very distant third. Race 2 saw M Sudhakar taking honours in the expert class with Shyam Shankar finishing second, a whisker ahead of Sarath Kumar and R Deepak. In fact, the top five riders were separated by just seven-tenths of a second – now that’s how racing needs to be!

The combined grid of the potent Super Saloons and closely matched RSC Esteems provided unparalleled action with a total of 15 cars on the grid. Thrills and spills are a given when it comes to tin-top racing and this time around was no exception as the two categories battled it out for respective class honours. As the lights went out for Race 1, Sailesh Bolisetti of RAD Racing shot into the lead with his team-mate Sriram in tow, followed by Nithvin Ravindran driving for Coimbatore-based GT Tuners. Past the half-way mark, Sriram managed to over-rev the engine. This culminated his race and promoted Nithvin to second, while Vir Raina finished third. Among the RSC class, it was B Balavijay who came out tops after a thorough duel with Deepak Chinnappa and Prithveen Rajan, who finished second and third respectively.

Race 2 saw Nithvin slotting himself in the lead with Sailesh and Sriram in hot pursuit. By Lap 4 though, Sailesh managed to make a move in the infield and completed a run of four consecutive victories in the series, with Nithvin and Sriram taking second and third. The Race Star class saw plenty of action as well, with few drivers outbraking themselves at C2 and some others entering the spot under a four-wheel drift rally style! It was a massively entertaining affair with Balavijay and Deepak fighting it out for top position. The former emerged just a whisker ahead at the chequered flag, while Vignesh Devarajan finished a close third.