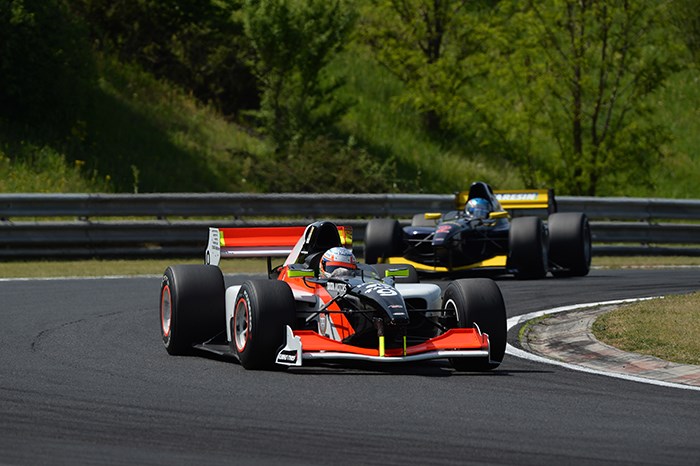 Narain Karthikeyan’s finished fourth in race two of round three of the AutoGP World Series held at Hungaroring .

After a strong performance at the preceding round in Marrakech where the Indian had qualified on the front row and set a new lap record, expectations were high for the race at the Formula 1 venue on the outskirts of the Hungarian capital, but the team was left to battle tyre, engine and pitstop issues throughout the weekend.

Having suffered tyre overheating issues in qualifying, Narain could qualify no better than seventh but despite a great start, he fell back due to an engine misfire. As a result he could only finish eighth but had pole position for race two due to the reversed grid format.

Starting from pole, Narain led race two in the opening laps until tyre issues surfaced once again and he started struggling with rear grip. The team decided to pit him but more bad luck was in store as a slow pitstop saw Narain rapidly dropping down the order.

He could ultimately do no better than salvage fourth place for his efforts.

“There were a lot of issues so we were not quick enough throughout the weekend. In race two a podium was possible in the second race, but the pit stop took too long”, rued Narain.

“A lot of improvement is needed all around, and I hope we can work on these issues for the next round at Silverstone.”

The slow pitstop particularly cost Narian dear as he was stationary for over 12 seconds with a normal pitstop usually taking around six seconds. This meant he was stationary for an extra six seconds – which definitely cost the podium as Narain trailed second place finisher Sergio Campana by just 5.51 seconds and was merely 3.2 seconds adrift of third placed R Agostini.

Team boss Michael Zele echoed similar sentiments – “It was a tough weekend for us. We had big trouble with tyre temperatures and thus lacked the necessary pace. Regardless, Narain could have made the podium, but lost too much time in the pits. I am sorry for our drivers, but the Hungaroring didn’t seem to suit us. We will attack again in Silverstone.”

After three rounds, Narain is lying sixth in the championship with 33 points.