After clinching pole and finishing second in race one, Narain won race two after starting seventh. 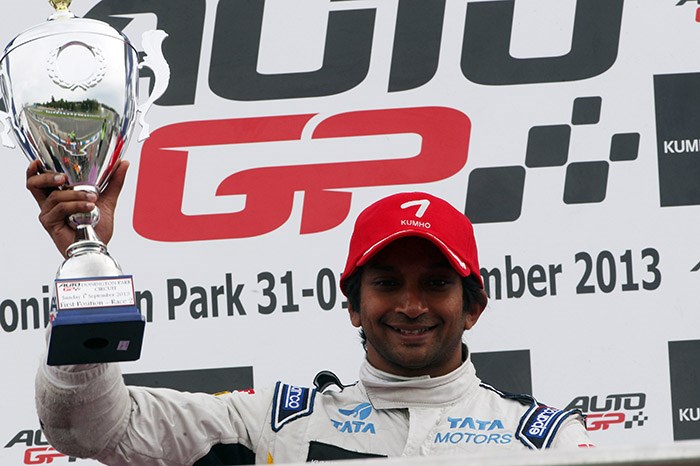 Round seven of Auto GP World Series saw Indian driver Narain Karthikeyan stage an incredible fight back up the order to win race two after having started seventh on the grid.

“It is definitely the most satisfying win of the season, to win by 13 seconds after starting seventh was amazing”, remarked an elated Narain.

The top step didn’t come easy though as the Indian was squeezed off track on the opening lap.

“I managed a good start but got squeezed onto the grass – however I kept it flat and passed [Sergio] Campana. He passed me back on the following lap but hit my front-left so I had some damage to the suspension”, said Narain, recounting the dramatic opening moments of the race.

The Indian was the first driver to make his mandatory pitstop and exited the pitlane near the back of the pack, but once in clean air, he set a searing pace that other drivers including the race leaders could not match.

He steadily climbed up the order as the laps ticked past, and running fifth with six laps to go, with all drivers ahead yet to make their stops. Despite encountering some traffic, Narain continued to set a slew of fastest laps while the leaders started stopping with a handful of laps to go.

As the stops shook out, the Indian ultimately took the race lead on the final lap, and crossed the line 13 seconds ahead of pole-sitter M Van Buuren while claiming the fastest lap of the race to top off a flawless weekend.

Narain’s massive haul of 40 points from the weekend means that he is now just 21 points behind standings’ leader Vittorio Ghirelli. With four drivers in contention for the title, the Auto GP World Series title will go down to the wire at the Brno circuit in Czech Republic, which will host the season finale on October 6.