The championship leader finished six tenths off his Friday morning benchmark, with Hamilton 0.019 seconds behind, although on a dry track . 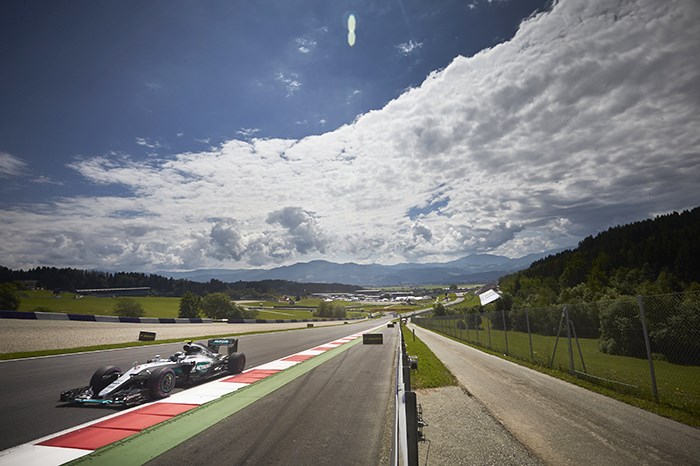 The championship leader finished six tenths off his Friday morning benchmark, with Hamilton 0.019 seconds behind, although on a dry track at the end of the session Rosberg set faster times in sectors one and two on the ultra-soft tyres before aborting the lap.

Hamilton had one scare late on when he was on a flying lap, only to brake hard as he came upon a heavily slowing Esteban Gutierrez in his Haas.

Just eight minutes into the session, and with Rosberg leading the way with a lap of 1m07.967s that remained unbeaten, a heavy rainstorm swept in from the eastern side of the circuit.

Over the first few minutes Turns 8 and 9 became drenched, while the rest of the track from Turns 1 to 7 remained dry, the conditions naturally catching out many in the final sector as they attempted to return to the pits.

The driving rain was accompanied by strong winds for around 10 minutes as it eventually made its way across the remainder of the circuit.

Once it finally passed after almost half an hour, it left teams and drivers playing a waiting game for the track to start to dry.

Daniel Ricciardo was the first to test the conditions on intermediate tyres just past the halfway point of the session, and over the next 10 minutes was followed by almost the entire field.

With just under 20 minutes remaining and with the majority of the track then dry, Ferrari's Sebastian Vettel was the first out on slicks, turning to the ultra-softs, while team-mate Kimi Raikkonen followed him out on super-softs.

Vettel, who will receive a five-place grid penalty for a gearbox change, eventually finished fourth quickest behind Force India's Nico Hulkenberg, but ending the session by sliding off the track and into the gravel at Turn 2.

Raikkonen had earlier gone off track at Turn 5 after just five minutes, firing across the gravel and into a spin from which he just avoided hitting a barrier, before taking an infield escape road to return to the circuit.

The Finn finished eighth overall, just under nine tenths of a second adrift of Rosberg, with Red Bull duo Ricciardo and Max Verstappen sandwiching the Toro Rosso of Carlos Sainz between the Ferraris.

Williams's Valtteri Bottas and McLaren duo Jenson Button and Fernando Alonso occupied the next three places, with the latter far from impressed with his running on intermediates when the track was wet.