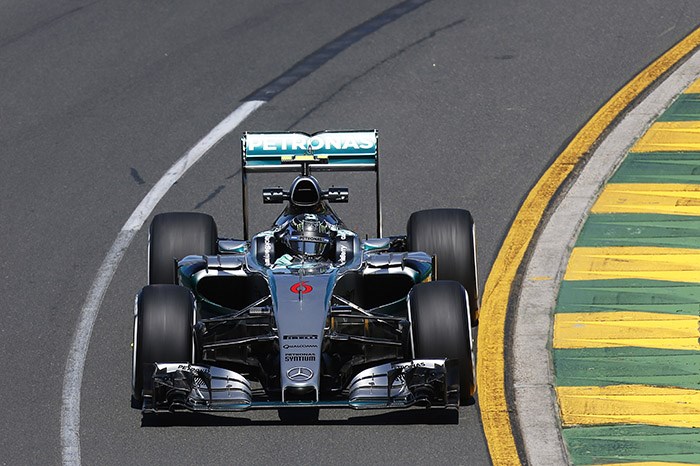 Nico Rosberg edged Mercedes team-mate Lewis Hamilton to top the first free practice session of the new Formula 1 season by less than half a tenth of a second.

His best lap of 1m29.557s fell less than two tenths shy of the fastest lap of the entire weekend at last year's Albert Park race.

Reigning F1 world champion Hamilton languished in the lower half of the top 10 for the first part of the session, before clocking a 1m29.586s best to leap up to second.

No one else could get within a second of the Mercedes duo, but Williams driver Valtteri Bottas got closest, lapping 1.191s slower than Rosberg to finish the session third fastest.

Toro Rosso rookies Carlos Sainz Jr and Max Verstappen were fourth and fifth (separated by just 0.053s) for much of the session, before Ferrari new boy Sebastian Vettel split them with a late improvement.

His team-mate Kimi Raikkonen was eighth quickest, just behind the second Williams of Felipe Massa.

Pastor Maldonado began the new Mercedes-powered era at Lotus by setting the ninth fastest time, but team-mate Romain Grosjean failed to record a timed lap after his E23 required a change of its floor.

Red Bull's Daniel Ricciardo recovered from an early hydraulic problem and a brief spin to round out the top 10.

He complained of "aggressive" throttle response from the RB11's Renault engine, while team-mate Daniil Kvyat was concerned by a lack of assistance from the power unit in slowing the car down under braking.

Kvyat finished the session just a fraction of a second clear of Sergio Perez and Nico Hulkenberg, who are both making up for a late start to pre-season testing for Force India.

Jenson Button and Kevin Magnussen completed a combined 13 laps for McLaren-Honda, which curtailed its running early once the team discovered an engine problem.

Both McLarens lapped more than two seconds slower than the Force Indias and roughly five adrift of the pacesetting Mercedes.

Amid an ongoing legal wrangle with its former reserve driver Giedo van der Garde, Sauber did not run either of its cars in this session.

The team refused to comment on the exact reason for Felipe Nasr and Marcus Ericsson missing the session when contacted by AUTOSPORT.

Roberto Merhi and Will Stevens also skipped the first practice session of the new season for the revived Manor GP/Marussia squad.

After its 2014 computer hard-drives were 'wiped' (ready to be auctioned off when the team was in administration), it was unable to update its software in time for its revised '14 cars to run.

The team hopes to be ready in time to run in practice two later on Friday.

Sauber and Manor did not leave the garages