Maini finished both DTM Nurburgring races in the top 10 to collect a total of eight points. 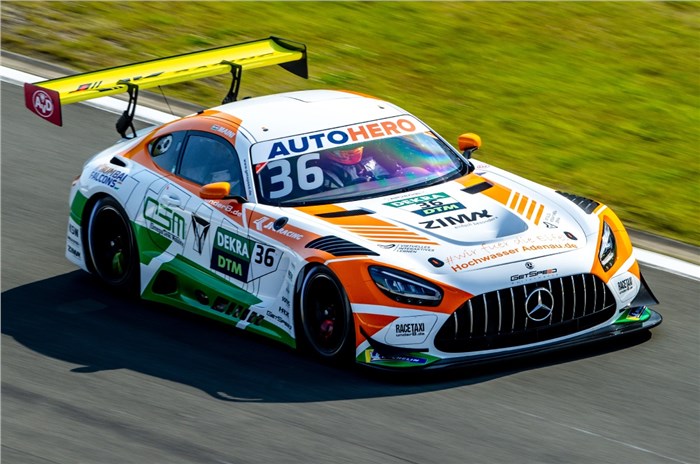 Arjun Maini picked up his first DTM points at the Nurburgring round, making him the first Indian racer to score points in the championship. The round marked a resurgence in form for Maini after a difficult round in Zolder that ended prematurely due to a damaged chassis.

It had been a difficult few rounds for Maini in the DTM series initially. Despite showing sparks of speed in practice, he had been unable to translate that into results. The previous round in Zolder was cut short after an error from Daniel Juncadella left his Mercedes-AMG GT3 damaged.

But the whole time, Maini maintained that he felt like he was taking steps in the right direction, and Nurburgring was the first evident sign of that. Starting Race 1 from 12th place, he made a strong getaway and moved up to 9th on the opening lap.

However, tyre issues hampered his progress in the latter stages and he had to nurse his car past the chequered flag in 10th place. Nevertheless, it was a commendable result and he’d managed to score his first points in DTM.

Qualifying the next day proved to be challenging, with Maini finding himself behind the wheel of a GT3 racer in wet conditions for the first time. He qualified in 14th place for Race 2 but a well-executed early pit stop saw him gain a handful of positions.

The frantic race saw nine cars retire, so it was all about surviving the chaos and avoiding unnecessary errors. That’s exactly what the 23-year-old did as he crossed the line in 7th place, thereby adding eight valuable points to his tally at Nurburgring.

Commenting on the race, Maini said, “Obviously I’m ecstatic with how the weekend went. It’s been a long timing coming and I’m happy to have finally scored my first points in DTM. Obviously, a lot of credit has to go to the team at GetSpeed. I think our pit-stop was the second-fastest of the weekend and if it wasn’t for their tireless effort, this result would not have been possible.”

“In fact, I think 6th was a definite possibility. There was the incident with Mike Rockenfeller, that cost us a lot of time and by the end of the race, I was gaining on Lucas Auer who finished only a second ahead of me. Nonetheless I look forward to the next round at the Red Bull Ring and I hope this weekend proves to be an inflection point for the rest of the season,” he added.

The next DTM race will be held at Austria’s Red Bull Ring from September 3-5. As always, all the qualifying sessions and races will be streamed live on Autocar India’s YouTube channel.