Balu secured the ITC title on his third attempt as the 2020 MRF Indian National Car Racing Championship wrapped up at Chennai’s MMRT. 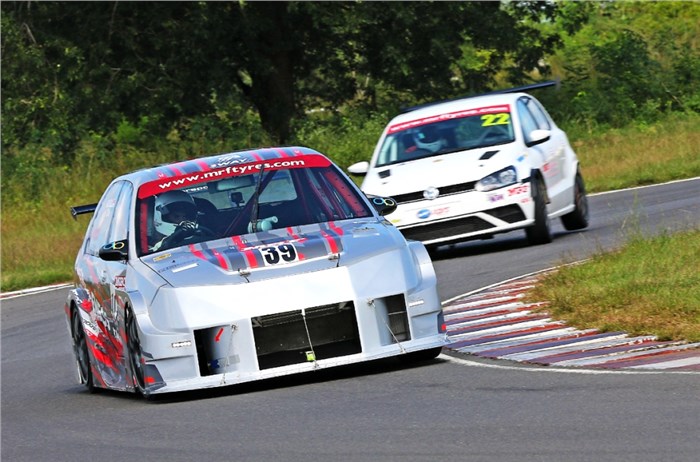 A few months ago, there were doubts on whether national championships would even resume this year. But organisers of the Indian National Car Racing Championship managed to pull together a drastically scaled down calendar with stringent safety measures in place. The rain-affected finale saw champions crowned in all the categories, with Raghul Rangasamy winning the Super Stock title, Tijil Rao taking home the Formula LGB 1300 title and Diljith TS winning the inaugural MRF Saloon Car championship.

Heavy showers curtailed all running on Saturday and only qualifying could take place on the day. Race Concepts’ Balu headed into the final round with a 35 points lead over FB Motorsport’s Keith D’Souza.

The veteran racer further built on that lead by winning Race 1 behind the wheel of his Honda City VTEC. After this he only needed seven points to seal the title, something he did so with ease after pulling off a cautious drive to 2nd place in Race 2. He ended up crashing out of Race 3, but he’d done just enough to pick up the crucial points he needed in the previous races.

Balu has missed out on the ITC titles by narrow margins to Ashish Ramaswamy and Dhruv Mohite in the past two years, making his latest championship triumph even sweeter. “After winning Race 1, I knew I needed just seven points from Race 2 to clinch the championship. So, I held position through the 10 laps for P2. This championship win is most special and most satisfying for me. The previous two seasons, I missed the title by a whisker despite enjoying big leads early on,” Balu rejoiced.

“This title is also a tribute to Joel Joseph and his Race Concepts team which worked so hard, sparing no effort to make sure I get a competitive car,” he added.

It was a tight battle in the Super Stock category, with Raghul Rangasamy ahead of Rithvik Thomas by just one point, heading into the finale. Rangasamy’s title challenge took a big hit as he was unable to complete Race 1, which was won by Alisha Abdullah.

But he made up for it by surging to victory in the next two races to take home the Super Stock title.

Tijil Rao went without a single win over the weekend. But his three podium finishes out of four races was enough to hand the young racer title victory in the Formula LGB 1300 category.

Viswas Vijayaraj scored two races wins in the last round, while Prithveen Rajan and A Balaprasath won a race each.

Round 2 had seen the introduction of a brand new category, the single-make MRF Saloon Car championship using the Toyota Etios. Despite being unable to win a race in the final round, Diljith TS’ three podium finishes was enough for him to win the inaugural edition of the championship.

Pista Motor Raceway to be built near Hyderabad: All you need to know