2013 European Rally Champion Kopecky took an unassailable 50 point lead in Japan with only one round remaining. 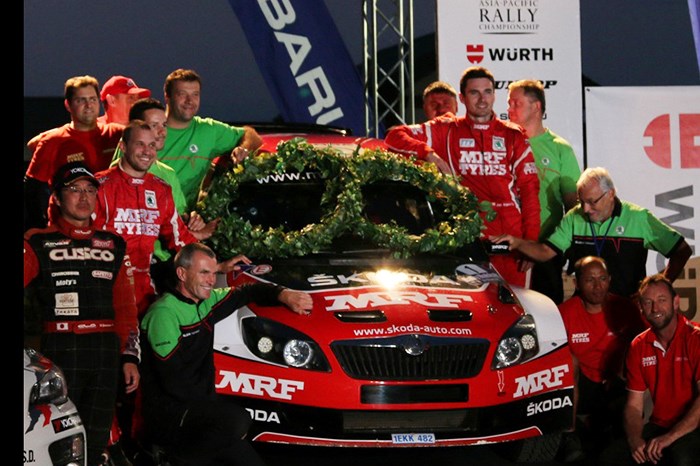 2013 European Rally Champion Kopecky took an unassailable 50 point lead with only one round remaining. His main rival and Indian Rallying ace Gaurav Gill crashed out of the lead of the rally and his team was unable to get the car ready in time for the final day.

Rally Hokkaido in northern Japan is traditionally one of the fastest rallies on the APRC calendar with faster cars often touching 240kph on the narrow tree lined roads, with the surface breaking up into deep ruts making it an extremely challenging event.

While Kopecky won the event easily by 42 seconds from his nearest rival, he controlled his speed and saved the car over the rough sections.

The Czech driver commented, “The car was great, the team was great and I would like to thank everyone from Team MRF Skoda to making this possible. They did an amazing job these past five rallies and hopefully we can do it again in China”.

Kopecky was also quick to thank his co-driver Pavel Dresler also from the Czech Republic. He said,“ I was trying my best and big thanks to my co-driver, he’s a part of the game and 50% of the result. Without him I would be lost somewhere in the forest and am happy that we didn’t make too many mistakes in the last 5 rallies. It's been a great experience competing together in all these different countries”.

With a total of 154 points accumulated over the past five events Kopecky wins the 2014 Asia Pacific Rally Championship Drivers title as he cannot be beaten, even with one round to go in China. India’s Gaurav Gill is currently second on 104 points but with only 39 points available to win in the one remaining round, it’s now impossible for Gill to retain the title he won in 2013.

India's Sanjay Takale finished 10th overall and won the Production Cup in Hokkaido, driving a Cusco prepared Subaru Impreza. “This was our goal to come here and win a round of the Production Cup as this will my last APRC event of the year. We’ll be back next year though, preparation for that begins now” said Takale at the finish.