The Spaniard extended his championship lead, fending off Sebastian Vettel and a resurgent Jenson Button. 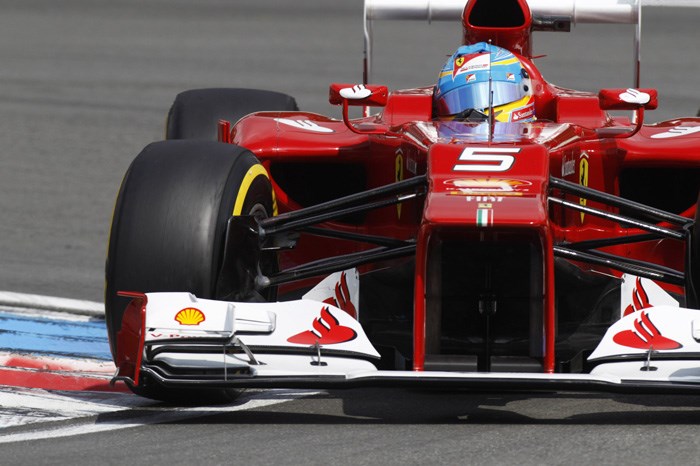 Fernando Alonso extended his Formula 1 world championship lead by fending off Sebastian Vettel and a resurgent Jenson Button to win the German Grand Prix at Hockenheim.

Alonso never had a huge lead in his Ferrari, but did enough to keep the chasing Red Bull and McLaren at bay. In the end he was helped by Vettel and Button battling to the finish, their dice finally settled by a penultimate-lap pass from the Red Bull.

In a similar scenario to the previous race in Britain, Alonso spent the grand prix under increasing pressure. The Ferrari established a slight cushion over Vettel's Red Bull in the opening stint on soft tyres, then came under greater threat once they changed to medium Pirellis at the first pitstops.

By that time Button was also in the fight. The Briton overtook Michael Schumacher and Nico Hulkenberg early on, then closed in on the top two, gaining some ground when his team-mate Lewis Hamilton - who had been delayed with an early puncture - unlapped himself from Vettel.

Stopping a lap earlier than the champion at the final tyre changes then allowed Button to sweep into second place. He resisted Vettel's attempted retaliation at the hairpin, and then set off after Alonso.

But in the closing laps it was Button who was under pressure as Vettel attacked. The Red Bull went down the outside into the hairpin with a lap to go and used the run-off area on the exit to complete a pass then did not impress Button, although the Briton still claimed his first podium since April's Chinese GP. The stewards are investigating the move.

Kimi Raikkonen took an ultimately lonely fourth for Lotus, as the Saubers showed great race pace and tyre life - Kamui Kobayashi and Sergio Perez coming through to fifth and sixth from their midfield grid slots.

Perez held on amid late pressure from Schumacher's Mercedes, which was running a three-stop strategy and charging back on fresh soft tyres.

Webber never featured near the front and took eighth, just ahead of Hulkenberg. The Force India driver drifted down the order as the race progressed, with his team-mate Paul di Resta ending up behind Nico Rosberg's Mercedes in 11th. Rosberg also pitted three times and managed to make up ground well after his practice and qualifying dramas.

Hamilton was one of several drivers delayed in first-lap incidents in which either contact or debris caused damage. The McLaren eventually retired, while fellow early pit visitors Felipe Massa, Bruno Senna and Romain Grosjean kept racing and got back to 12th, 17th and 18th respectively. Also in trouble was Senna's Williams team-mate Pastor Maldonado, who appeared to be suffering high tyre wear as he slumped to 15th.