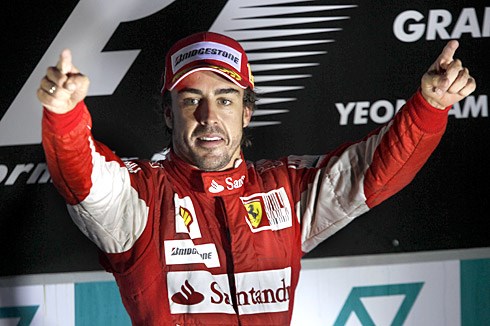 Ferrari's Fernando Alonso stormed into the world championship lead by winning a wet and delayed Korean Grand Prix, on a disastrous day for Red Bull that saw Mark Webber crash out of second and Sebastian Vettel have an engine failure while leading. Lewis Hamilton boosted his title prospects with second for McLaren, but a lowly 12th all but ended his team-mate Jenson Button's hopes.

Racing would not actually start until nearly one hour and three quarters after the scheduled time. The rain forced first a short delay, then four laps behind the safety car, then a pause of nearly an hour, and then a further 13 laps of following the pace car before conditions were deemed satisfactory.

Vettel immediately pulled out a 2.8secs gap over Webber on the first lap of racing. Then it all went hideously wrong for Webber next time around, as he ran slightly wide at the right-hander heading into the 'city' section, and spun into the opposite wall, before rebounding back and collecting the passing Nico Rosberg's Mercedes, which had overtaken Hamilton for third at Turn 3 a lap earlier. This brought out the safety car for a few more laps before racing finally got underway in earnest.

Vettel made a break once again, establishing a three-second cushion over Alonso before the next safety car interruption on lap 30, when Toro Rosso's Sebastien Buemi speared into Timo Glock's Virgin at the end of the long straight.

Vettel and Alonso had passed the pits when the yellow flag came out so had to do another lap, but Vettel retained his lead. A problem with the right-front wheel change on Alonso's car let Hamilton into second - but not for long, as the McLaren ran wide at Turn 1 at the restart and handed the place straight back.

Vettel could not escape to the same extent in the next stint, with Alonso and Hamilton lurking within a few seconds of him, but still seemed to have the race under control until his Red Bull's Renault engine erupted at the start of lap 46. Alonso then edged away from Hamilton in the gloom to clinch his fifth win of the year and open up an 11-point lead over Webber, with Hamilton's second place putting him up to third in the standings, 10 points further adrift. Felipe Massa completed the podium in the second Ferrari after a consistent race, while Michael Schumacher produced his best performance of the year by taking fourth, the Mercedes driver flying in the very wet opening laps.

Renault's Robert Kubica slipped through to fifth while Tonio Liuzzi followed him to take sixth for Force India.